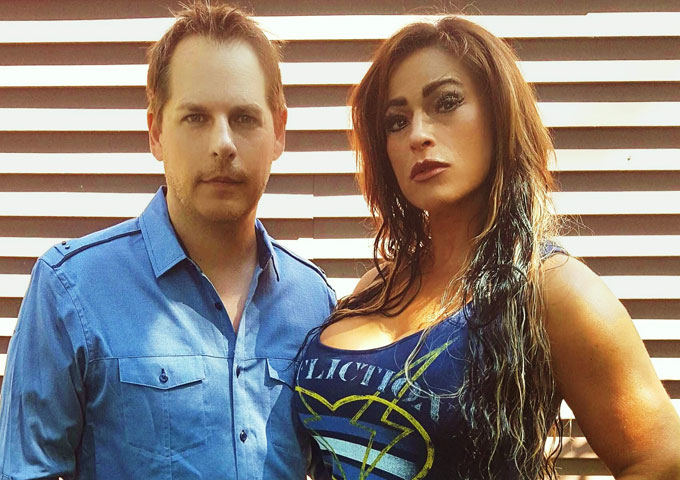 “Cliché” is Anthony Casuccio and Lana Marie’s fourth single. This time around, the seasoned duo better known as A&L have put together an upbeat, pop/alt-country song. “We wanted to poke fun at the typical love song lyrics.” say Casuccio. “Cliché” takes a comedic look at the typical subject matter and lines used in songwriting.

“The past year has been filled with so many highlights, Anthony and I have been so honored and humbled with the attention our music has gotten from radio, industry insiders and most of all, the fans,” says Lana Marie. Adding their unique talents to this song are drummer Rich Smith a rhythmic force in WNY and legendary bassist Jerry Livingston.

The frantic energy and catch phrases are spawned here in droves. Only the insentient could listen to this track and not blissfully chant “I tried to tell you each and every day, but the words got in the way, so I’m a cliché,” afterwards for all eternity.

Many would consider the chorus one of the hookiest in recent times; while others with a more critical ear may turn to the clever harmonies which have traces of dissonant intervals. It doesn’t matter. Those who get hooked to this song will hear both soon enough.

The track initiates with a heart-racing melody which rampages through the entire track. This one has an interesting arrangement as the chorus slowly emerges from the extended verses, mimicking dramatic form to an extent. Chorus as climax, cliché’ indeed! This duo has definitely come a long way with some serious work, but they always sound like fun.

Even better, for all their merits they never take themselves too seriously and have managed with ease to evolve into an impressive alt-pop and rock ensemble. Honestly in these times, I think it is almost revolutionary in these times to sing about tongue-in-cheek fun themes instead of violence or meaningless whiny stuff. The world needs more creativity, openness and to lighten up, that’s for sure.

The duo also maintains a high energy sound without ever sounding infantile, trite or bubble gummy. Listening to and genuinely enjoying any music by A&L does not require a compromise of one’s intellectual capacities either. How many bands do you know that can deliver jagged rhythms, soaring vocals, collapsing melodies, unique musical settings, and harmonies that go from liquid to strident before you can say “Cliché”.

By and large, Anthony Casuccio and Lana Marie hit a really neat balance between production extremes, gritty guitar riffs, and some really solid pop inflections. The result is an addictive and extremely playable recording that can be repeated again and again: it’s spunky, stylish, and it has enough of an edge to let you know that this really is A&L.

I’m not sure if this is the perfect summer track to blast with the hood down, but its damn near close as can be…and that’s not meant to be a cliché either!

MORE ABOUT: A&L is made up of two seasoned industry professionals: Anthony Casuccio and Lana Marie. Anthony is a 20 year music veteran whose production work has been nominated for three Grammy awards, been featured in major music publications and topped the music charts.

Anthony’s received RIAA certified gold records for his production work. Lana is an award winning vocalist who has been a long-time force on the WNY music scene and voice to many jingles on radio and television. A&L’s last two songs have been played on radio all over the globe and received numerous features in music industry publications. Their songs have constantly charted in Europe.