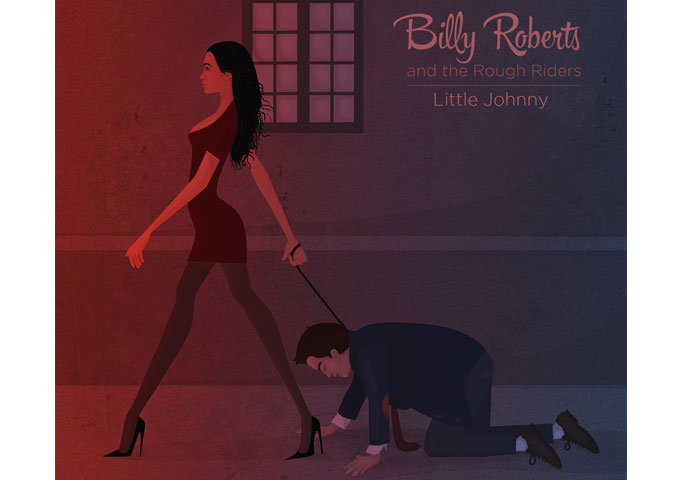 If there’s one thing you can say about Billy Roberts and the Rough Riders, it’s this: he’s got taste, style, and chops. Billy’s last album, “Go By Myself”, was so good it felt like sinning and getting away with it. One hot roots rock classic after another delivered with all the nonchalance of a connoisseur. By the time I got my tremulous hands on the new track “Little Johnny”, there was only thought bouncing in my head, ‘will he be able to top that?’

The Billy Roberts and the Rough Riders alt-rock, blues and country style is so embedded into his music that enjoying Billy’s songs often means paying attention to the fine print, the way he works subtleties, the deftness with which he manipulates the familiar. On the face of it, “Little Johnny” seems like retreading old ground, albeit with more bluesy and percussive innovation this time around. Then the backdrop slowly began to creep to the fore. This track, you’ll soon grasp, is all about sound and mood. And there it gets personal, because what you get out of this music has a lot to do with what you put in. If you pay a little more attention, you start appreciating the subtleties of Billy’s music. It’s almost familiar, but in the way of a dream that disappears when you reach out to grab it. The way the bass guitar is pushed forward, so you really hear it. The way he doesn’t play a single extra guitar note, only those that matter – it sounds casual. It’s completely premeditated.

This is Billy Roberts’ most swirling music to date, never has he been so intoxicating, so deceptively deep and yet so precisely elaborate. This is a different beast from “Go By Myself” altogether. Whereas that album thrived from the directness of the songwriting, “Little Johnny” weaves an intricate tapestry of sounds, brooding colors and shades, all riding on a disarmingly naive blues melody.

And there’s the vintage guitar-work: a bewitchingly wicked interplay of simultaneous rhythm and lead notes that is more sophisticated than anything Billy has done before. Over this pulsating sea of sounds, you get the best of his moody, laconic singing rasp – sheer brilliance.

Billy Roberts and the Rough Riders sows and reaps within the space of three minutes and 40 seconds on “Little Johnny”, delivering what is one of his most accomplished platters, one of his most tasteful songs yet. Dark, robust and perfectly understated Billy has taken his style a step further: while the old seeds are firmly rooted, this veers away from the playfulness of yore towards a more urgent, and heavy-laden sound. Is the best still to come?