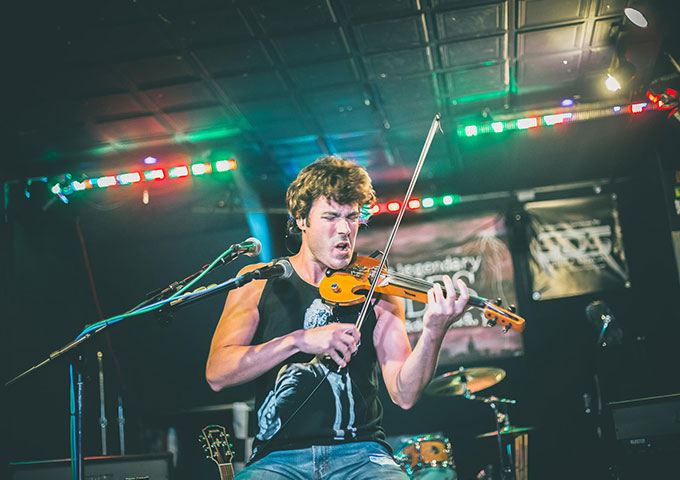 Blending elements from a variety of genres and decades, Brian Fitzy falls somewhere between Daryl Hall and Jamiroquai by way of A  Tribe Called Quest.  He’s noted as an acclaimed vocalist, electric violinist, guitarist, and beat-boxer. Bringing these elements together live with looping technology, the result is soul-pop with undertones from the golden age of hip hop.

Brian grew up with a musician mother who turned him onto prog-rock and fusion at an early age. By 9, he was playing violin. Soon his prodigious talents began to shine through, and it wasn’t long before he was sitting in with professionals such as Philadelphia legend John Blake when Blake played his elementary school. From then on, each year he would learn a new instrument, building a veritable symphonic skill set. Upon graduating from high school, Brian formalized his talent through earning a degree in classical instrumental performance on violin from West Chester University.

Brian’s post-college career began with a bang when he performed with the Foo Fighters at the Grammy Awards as a Top 3 finalist in the “My Grammy Moment” competition. That performance garnered him support and features from TV stations such as 6ABC, NBC10, and CBS3 in Philadelphia, as well as prime regional radio coverage. Since then, Brian’s career has blossomed as a solo artist and a sideman. He’s performed everywhere from dives to Madison Square Garden. He’s also earned endorsements from Fishman Transducers, Wood Violins, and Westone. In addition, he’s had the good fortune of working with bands he grew up admiring such as Rusted Root and members of the Roots Crew.