Craig Johnstone (formerly of This-z-This and Sledge Nicely & the Panty Bandits) is a passionate and dedicated Indie Rock artist currently living in Red Deer, Alberta. “We Humans” is a collection of home-recorded songs, written and produced over several years, most of which Craig has created and performed the majority of the sounds on.

He makes simple observations and twists them around into amazingly left of center songs. Craig is the freshest, most genuine, most original, most exciting, most intelligent voice to emerge in pop since…I can’t even remember when! He is an extraordinarily compelling mix of influences from the 1960s, 1990s and the 2000’s.

Craig Johnstone sets his wonderfully quirky stories to a blend of indie and garage folk-rock, infused with a plethora of theatrical elements in between. This record is like one of those rare occasions where somebody is rambling on to you about what seems like the most specific situations, and you find yourself nodding along the whole way through- because the same bizarre things happen to you, or because they don’t!

That’s what Johnstone is. He isn’t somebody to be analyzed or dissected because you’ll never work him out anyway. He’s someone to be listened to and understood. Period. His whimsical storytelling only becomes more compelling with the peculiar instrumentals and the off-the-wall sound production. To be frank, you either love Craig Johnstone, or you don’t. There’s no in between.

Johnstone’s voice maps a direct line to the listener’s soul and often lifts even the schmaltziest sounds above cliché. This album heralds in a recording of sonic experimentalism and simply stunning storytelling. “We Humans” is strikingly original; you will never, ever hear anything that sounds like it.

On first listen, there are a number of tracks over the album that veers dangerously close to a dissonant style, but that couldn’t be further from the truth. Craig actually smothers the songs in melody and then disguises them in over-the-top production echo and other effects or screeching instrumental interludes. “Ass Over Tea Kettle” may be a good example of this. “Big Rock Candy Mountains”, is another. 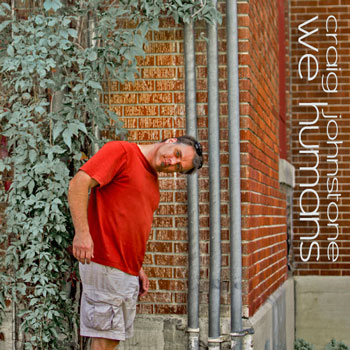 If there’s anyone in the music business who manages to fend off the mainstream label so blatantly, it’s Craig Johnstone.  He proves to be a master at crafting distinctive, memorable music that would never find a place on the radio, with nothing more than his gravelly voice and some rock-meets-blues-meets-folk-meets-country backing sounds.

Listen to the chugging rhythm of “Ear Bastards”, or the acoustic driven spookiness of “We Go Together”. And of course, there’s his vocal range, which covers everything from atonal rasps on “Buttnugget 16” to achy crooning on the title track, “We Humans”.

“We Humans” is an eclectic masterpiece of an album that contains impressive, timeless songs of great lyrical depth, melodic beauty and stylistic variety, bordering on the absurd. Johnstone continually stuns with his ability to pioneer his own unique sound throughout the album without falling into any stylistic rut.

Whether you like Craig Johnstone as a phenomenon by himself or whether you like only certain of his styles, this album will not disappoint as it offers enough contrasting brilliance to surprise everybody.