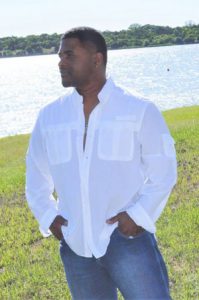 Earnest Williams is an American R&B singer, songwriter, producer born and raised in Dallas, TX. Williams grew up with a passion and love for singing and writing music. As a youth he sang in the church choir. In High School he put his talent to work on stage performing in school talent shows.

Earnest Williams was raised with 3 brothers by a single mother. “I was a child with big dreams of becoming a famous singer one day. I have a lot of passion to perform and found comfort in music”.

Williams was influenced by various artists such as Keith Sweat, Charlie Wilson, Al Green and Prince to name a few. “I would like to be remembered for my passion and music even after I am gone.” As an emerging R&B singer with a unique sound Williams has just released his new EP called “A Man’s Perspective”.

Earnest Williams is ready to jump into the R&B ring with some of the best and is working hard to prove himself as an artist committed to fulfill his dream.