Everpresent writes songs that urge you to sing along, while they slather them in synth, particularly of the rich variety. The result is a pond of watercolors swirling together into a purple-brown hue, which turn into an entrancing onyx while retaining the vibrancy of its singular colors. He takes his best vocal talents and increases its appeal in thumping, crunchy bass driven rhythms, and the clean, melodic, electro sounds of highbrow pop. Everpresent itches for a large pop sound, but he never chooses a single direction. All he knows is that he wants more synth and he wants it to win you over, which it totally does on his latest album “Parallax” (Featuring Katelyn Isaacson).

Everpresent is Matthew Cahoon, a unique vocalist, keyboardist, percussionist, and composer that has been creating his own dark pop electronica genre, since 2002. With several albums and videos released, as well as years of performance and national touring experience in multiple genres as a vocalist, keyboardist, and percussionist, Matthew brings a wealth of passion, creativity, and drive to his art. Everpresent wields quality songs to listen and dance to on “Parallax”. Both Cahoon and Isaacson flex their vocal strengths here, especially on numbers like “Take Me”, “Inside” and “Window”. 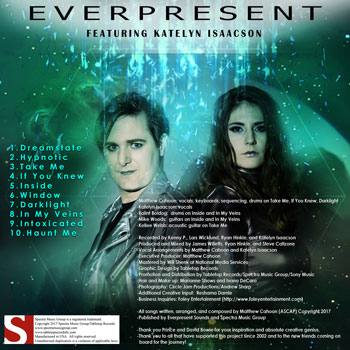 The album sees Matthew Cahoon at the top of his board, twisting knobs and inserting sounds for a snappy package that feels cut, bound, and wrapped to its perfect form. The 10 songs on “Parallax” urge you to move – particularly on “Dreamstate”, “Darklight” and “In My Veins”.  The record interacts with your feet and ears simultaneously for an engaging listen.

For longtime fans, the album can work as an ongoing experiment for a pop-loving dance floor. For newcomers, “Parallax” sounds like Everpresent has already remixed the music himself, and doesn’t need any particularly enhancements. It’s thoroughly satisfying.

There are many genial flashes of nostalgia, and by the time you make it home, after listening to this during your ride, all of these songs will be stuck in your brain. “Parallax” is a reflection of a collaboration that delivers songs like “If You Knew Me”, “Inside” and “Intoxicated” which punch harder, hook quicker, and warrants replays long after this year ends.

Overall, “Parallax” is an album that shines at its brightest when it’s walking the tightrope between melody and rhythm. In doing this, it exposes the listener to sounds bring out a mesmerizing, very full synth pop sound.

Too often artists dabble in a genre but never really grasp what it takes to make it work and that’s not an accusation you can aim at Everpresent. That’s what makes this album work so well. He blend synths and vocals that cut through you, and leave one hell of an impression. Everpresent’s music is certainly interesting and may be regarded as a fresh offering to music enthusiasts.

Even though the “Parallax” album is a collection of rearranged, remixed, and remastered versions of the best and most popular songs from 2010-2015, but with all new backing and co-lead vocals by Katelyn and new vocals and musical arrangements by Cahoon.

The album’s diversity and unpredictability has the power to keep its listeners yearning for more sonic surprises. Matthew Cahoon stands apart from many of his Synthpop-inspired contemporaries primarily because of his willingness to take advantage of a wider array of musical styles.