Gina Brooklyn – solidly concentrating on creating perfection in her music! 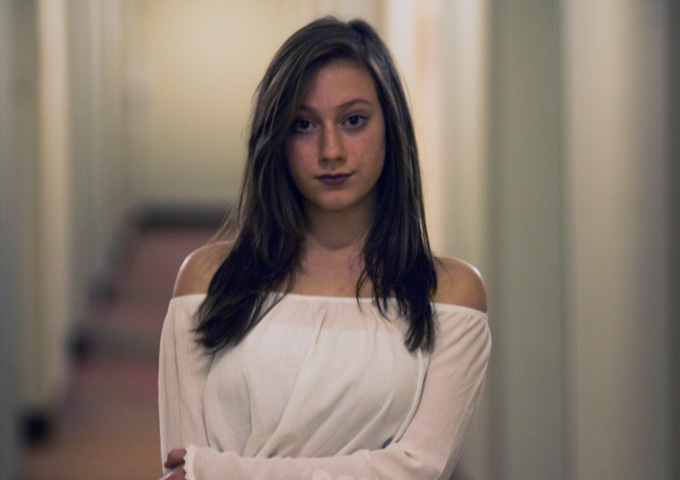 Like many fans, I was absolutely blown away when I first heard “Faceless”. It’s not every day that a mainstream release from a new artist is so thoroughly and artfully written. Too much new music is bedazzled in production, becoming a product unlike that from which it originates. But here was a girl with a beautiful, sultry voice and a piano, or a guitar, or both – and it sounded wonderfully organic and real. Polished, but intact. A precocious talent, Gina Brooklyn recorded at the infamous Studio City Studios in LA, 515 studios in Nashville, and Lava Room Recording Studios, in Cleveland, OH, when she was just 16.  At only 14 she had already recorded at Omnisound and in Nashville, TN as well as Threshold Recording Studios in NYC. Gina who has performed at many venues throughout the United States including The BlueBird Cafe in Nashville and The Rock and Roll Hall of Fame in Cleveland, recently signed with Snow Entertainment. Snow Entertainment represents aspiring as well as established talent in the entertainment industry, and was founded by Cinda Snow, mother of television and film actress Brittany Snow.

Gina Brooklyn is simply one of the most talented young singers we have at the moment, and there are actually many talented singers out there if you choose to find them. Her music is quintessentially her own but leans into the pop spectrum.

Many entertainers want to make their presence as intense as possible to an appreciative audience. Gina Brooklyn captures everyone’s attention simply by just being her subtle talented self. Her manner is reserved and she is both singer and musician during her performances, solidly concentrating on creating perfection in her music without drawing attention to herself.

A simple and pure girl at heart, the audience is rewarded with some of the most creative harmonic music around the mainstream these days. Gina’s every song is a work in perfection. Her self-titled EP is a beautiful recording and Gina is following her love of music wherever that happens to take her.

I am more than happy to join her on that journey, because I know the massive talent she possesses, and I know she can do anything and go anywhere.

In this EP, Gina returns to the core roots of music: her piano, and her voice. And on songs like “Supposed To Be” and “My One and Only” we can really feel the intense relationship cultured between Gina and her instrument.

From the adventurous chord progressions on “Beauty All Around” to the sultry, smoldering vocals on “Do You Know”, she confidently immerses her music in gloriously warm tones, creating a truly amazing recording. Throughout, a perfect balance is formed between the instrumentals and Gina Brooklyn’s vocals.

They complement each other so well, allowing the listener to fully appreciate the beautiful sounds. Gina’s voice is very characteristic – smoky and sweet as on “Faceless”– she’s does not try to knock you over with vocal histrionics like some of the current divas, but rather draws you in with an understated sultriness, yet vulnerable style that is completely refreshing, especially given the bulk of today’s pop music direction.