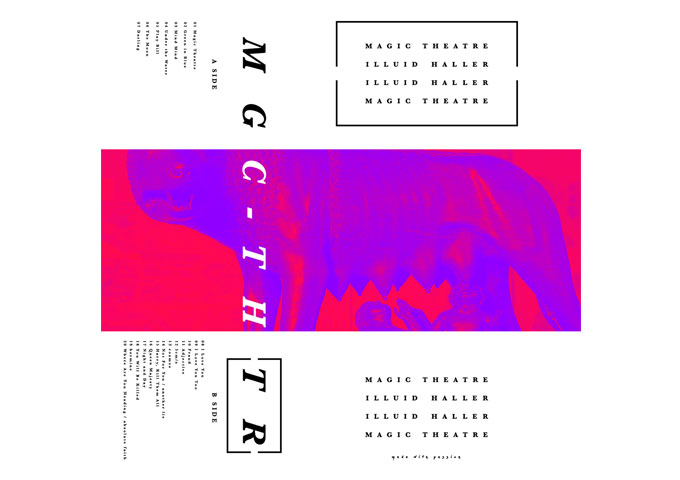 Illuid Haller aka GwangHyeon shows a unique flexibility and verve, a glowing life that drips, melts, and molds around the original sounds to be found on the album, “Magic Theatre”. He never competes with his contemporaries for attention, but it is always clear that he absolutely could, no matter their standing or legacy. And yet, it seems, as if he had popped up out of nowhere. It’s particularly difficult to imagine Illuid Haller sitting in his basement or bedroom when listening to this recording. Whether working in strands of hip-hop, psychedelic ambient, acid jazz, or whatever might come to his mind, there’s something inherently glowing about his beats. All those genres are jammed together into a single album; he finds joy and fun in them all, so why bother trying to deny any of it?

Throughout these different styles, Illuid Haller’s beaming musical smile acts as a unified presence of his visual approach to music. One moment he’ll work out some jazz fusion as on the title track, “Magic Theatre” with its schizophrenic sax, and then he’ll produce a hip-hop groove for “Under The Water”, or an acid jazz soundscape on “Play Bill” and neither suffers in comparison. Listening to the album, there’s no one genre in which you’ll come away feeling that it’s the one he should be working in, forsaking all others. It helps that he makes all of his tracks sound good, regardless of style, because of his reliance on imagery in sound. Each instrumental tells a story.

Illuid Haller has never sounded as powerful as on the stark and busy piano arrangements of “The Moon”, and “I Love You”, while the over-driven “I Love You Too”, hits one of his better, more eclectic creative flows. The stunning track finds Illuid bouncing through a dirty, crunchy guitar sound, and a jittery bass jam. “Fraud/The Beat” swipes into an experimental-infused bounce without a moment’s notice, while “Adjective” adds a breathy female vocal to the proceedings.

The bigger theme, of course, is that Illuid Haller is much more than just some run-of-the-mill electronic producer. He’s got soul and tons of creativity, and he knows how to use it in a way that doesn’t seem overbearing, yet it is completely left-field, filled with disparate voice samples and diverse rhythms and sounds.

No matter how hard producers may try, there’s something that will always feel completely inhuman about electronically induced music. It’s in the details, which is to say that they’re all perfect. The computer-aided genre is practically a glass-half-full demonstration of science versus human art. What happens when you create art using the meticulously fine-tuned exactness of science? Electronic music, apparently.

This, in a nutshell, is what makes the South Korean-born producer such an interesting case study: He manipulates electronic music to a place where it seems handmade. It helps that he has been playing jazz piano for about seven years. And nowhere is it clearer than on fleshed-out, organic sounding tracks like “Queen Majesty” and “Night and Day”.

I could go on about the effortless likability of “Magic Theatre”, but the most critical takeaway is how nuanced every single track is, on behalf of Illuid Haller’s unparalleled attention to the manipulation of detail. He capitalizes on what other artists consider superfluous, and he does it with a finesse that seems completely natural. As the pomp of big-blasting EDM subsides, there’s never been a better time to be an innovative talent with an ear for exciting music. Illuid Haller aka GwangHyeon is that talent.