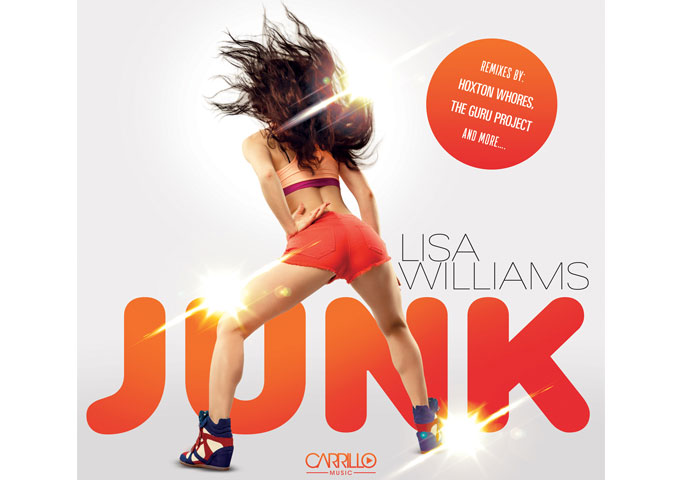 Lisa Williams has released her first solo project “Junk”, under the Carrillo Music label, after securing a Billboard Top 25 position with “Awake” in a collaborative work with Grammy nominated House legend Eddie Amador, under the same label. “Junk” includes a remix package from Hoxton Whores, The Guru Project, Lizzie Curious & Kissy Sell Out.

Deep, funky, hypnotic and playful is how I can best describe this track. It is, especially for a solo debut, as close to a homerun as you can get on your first swing. “Junk” brings back that swing vibe which was very popular back in the 20s and 30s, and blends it with the 1940’s Mambo influences from Cuba to deliver a speeded-up, ultra-modern electronic dance sound. Add the sassiness that Williams brings along with a little bit of pop influence, and it seems as if Lisa has found a style of her own right now. Very refreshing!

But the major draw of this new project is not just in its accessibility, danceability and its relevancy in the dance-pop world, it’s the melody. Remember the time when music was popular because it had such indelible melodic structures that were almost always universally known? Lisa adds that same melodic appeal to “Junk”.

As a complete listening experience – there’s a kind of seamless synergy to “Junk” that defies classification. Like all great pop performers, Williams borrows from a good handful of genres and/or influences, putting all of the pieces back together in such a way as to bring out something special. Added to the fact that Lisa Williams’ sweet and sultry voice has a winsome way of speaking to the hearts of dance music lovers, “Junk” is a win-win track, regardless of how you see it!

More About – From a young age Lisa performed in many theatrical shows in her local city Newcastle Upon Tyne in the United kingdom. After taking a break from the stage to focus on her corporate Career she felt it was time to focus on what she truly loves and moves her soul. Growing up and listening to dance/house music this was the route to take. Once Lisa had that first track signed there was no stopping her! She honed her craft and more interest starting coming in from many producers around the globe, next was the House Legends the Hoxton Whores. Lisa & Aneesh Gera worked on a new Original track “Flashback Rewind and this was picked up on by Label Boss Rod Carrillo from the U.S Label.