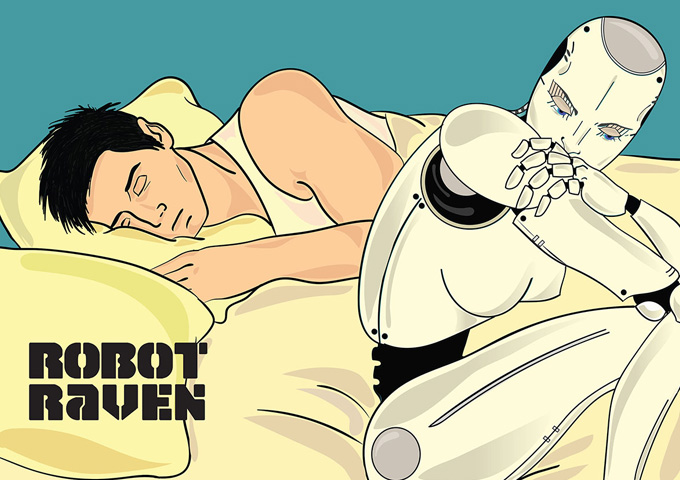 With “Life Goes On”, Robot Raven’s latest album, it’s tempting to zoom in on any single turning point in the duo’s timeline to figure out how they made it here. The obvious choices are “Greatest Hits, Part One”, and then “Greatest Hits, Part Two”, containing 36 of their best tracks, and released before any other album or single.  John Rigg (singer, instrumentalist and producer) and Edmond Bruneau (lyricist), have a habit of doing things in an odd manner, which perfectly matches their eclectic characters anyway.  Rigg creates robot machines and is reputed to have the world’s largest museum dedicated to toy and replica robots located in Northeastern Washington. Bruneau is an ex advertising executive who writes jingles and books of poetry.

Moving forward, most bands morph into a shinier and sexier version of their rawer original incarnation, not Robot Raven. Remember they’ve already made their ‘greatest hits’ records, so they’re moving backwards to complete the catalog. Sheer genius! As they morph into a rawer more visceral incarnation of their shinier, sexier selves on “Life Goes On”.

Twelve tracks, on which they lament, rant and rave about relationships and its attached emotions. Only now, though, they stretching out their legs and exploiting their resources to full effect.

There are times when you hear a buzzing layer that doesn’t seem to come from an amp or anything; it’s just there to add a little more dimension. The studio trickery is helpful in both widening the album’s general scope and highlighting textures one at a time, be it a gossamer falsetto or a keyboard figure.

The opener, “Life Goes On”, is so total in its mystifying choral sweep that you almost miss the song’s personal implications about two people trying to get along and deciding whether or not to stay together. “When Loving Right is Wrong” starts cosmic and grows until it’s like the Robot Raven are trying to one up anyone in today’s field of gusting psych rock.

Guitars and drums coexist beautifully in this band, and some of these songs don’t require much else, even as additional elements pop up all the time. “If I Can’t Laugh” is splashed with acoustic sweat, toting a well-defined electric guitar riff and ascending with a high-stepping swatch of choruses.

The crouching “Next Best Thing” is at first driven by the rumbling bass, then carved by the spidery acoustic strumming. “Rub Her Soul”, the oddball rockabilly-induced number, is both goofy and irresistible.

The catchier their songs are, the more fun it sounds like they’re having, and who can argue with that?  “You Know I Want You” is the sound of Robot Raven eagerly and grandiosely taking things into their own hands, with Rigg loading up all his studio trickery. “Text Me, Don’t Sext Me!” has a female vocal and a wah-wah guitar wrapped into a ShowTime soundscape.

I gather it’s a track meant to go on their next “Greatest Hits” record, but got on this one by mistake. If you adore the Everly Brothers styled melodies and harmonies, or maybe even pieces by the Traveling Wilburys, you’ll certainly revel in the album’s closing songs “Make Someone Happy”, “Always Had The Power” and “Life Goes On” (reprise), which are a little less rock and a lot more roll.

The songs on “Life Goes On” are more heartfelt and seem to have a deeper personal meaning than past material they put out.  This shows a clear progression in their craft and an even more intimate chemistry as songwriting partners.