From ushering star comedian Tommy Davidson around the island of Guam as a rapper/host/celebrity liasion or working with the marketing team at sattelite radio with top musicians such as Trey Songs, Anthony “Sleep” Thomas, born in Southeast DC and raised in various parts of the DC, Maryland, & Virginia (DMV) areas went from playing drums on buckets cans and playing instruments at parties for various go-go bands while rapping onstage with his partners, to hanging out in the streets and nicknamed “Sleepy” for his droopy eyes and expertise in street money collections.

That nickname stuck and followed from his hustling days in High School all the way into traveling throughout the United States and overseas after enlisting in the military where he started to create a buzz everywhere he went from doing his music, shows, and radio commercials. 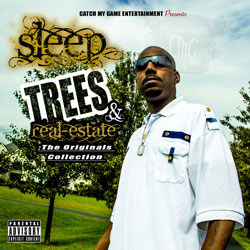 Sleep returned to the DMV area and started working back with his partner producer Anthony Ward aka AW (‘Aye-Dub’) whom he met in the service and recently moved from Florida to New Jersey. While AW was working as a producer/engineer over the bridge in Philadelphia, PA with the likes of artists such as Beanie Sigel and Takedown records, Sleep helped lay the ground work for his friends record label Catch My Game Entertainment by appearing on and promoting various mix CD’s and developing material focused on releasing its own artists.

After years of practice and working in many studios between New Jersey and Florida, he dropped his underground street mixtape CD entitled “Left Field” then formed a group with AW aptly named CMG Bosses, short for Catch My Game Bosses, and the pair dropped their first all original street mix entitled “Military Issue” meaning ‘the tools, and situations survived only by the grace of God, which are given in life to aid in your walk toward success’.

Sleep now doubles back with his new singles, an outspoken anthem titled “It’s On” feat. AW, and the controversial political feedback song “Power”, both produced by AW for Sleep’s new EP “Trees & Real Estate” that’s packed with a few new bangers, and some of your choice past favorites.

“Trees & Real Estate” is now available on Bandcamp, Itunes, and most online streaming sites. Big Sleep is also currently working as the General Manager of Catch My Game Entertainment, and booking various show dates around the country to perform, and host events, as he sets his sights on helping to expand the Catch My Game brand and becoming one of the biggest artists known while still staying true to his side of the map, the DMV. Now, along with a new CMG Bosses project “MI2” on the horizon coming soon, that would make any Sleep fan mimic his trademark ad lib “YAYY!!”