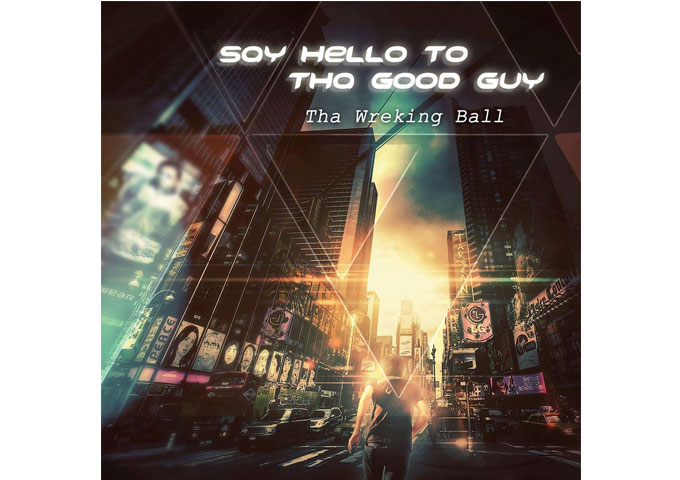 Modern rap is absolutely in trouble. From the two to four words in the entire writing, or the repetitive repulsive language, it’s just bad. Old school hip-hop actually made sense. Granted, it has bad language, but there were rhymes. Lyrics were legitimate and thought out.
The new album, “Say Hello To Tha Good Guy” by Tha Wreking Ball reminds me of the good hip-hop days. The lyrics are deep and are what rap should be. I’m very familiar with other Christian rap artists, but this guy is stellar in his approach and definitely has a gift.

TWB has become an insanely talented artist. His rapping and vocals on this album are on point. It is great to see a Christian Hip-Hop artist who isn’t afraid to make his own style and type of music, instead of following what mainstream artists or other CHH artists are doing. “Say Hello To Tha Good Guy” has so much emotion and passion in it, and I appreciate the honesty TWB puts into his music that shows how people have struggles and it isn’t just like “Jesus saved me, life is perfect.” I think it is good to get honesty that allows someone to talk about struggle too, but you can definitely see the hope in his songs.

Its artists like Tha Wreking Ball who are working hard and bringing hip hop back to its roots. They tell stories. They talk about struggles. They try to be positive. No cussing needed, just deep and emotional lyrics mixed with fantastic production. There is no doubt TWB is an insane lyricist, apart from producing his own music. It is apparent on tracks such as “Dance Like David”, “I Won’t Say Die”, “You Are Awesome” and “Time Well Spent”. And if you love vocal hooks and melody, you’ll be blown over by “I Will Save You”, “Life Is Good” and “Hear My Cries”.

Real, raw, honest and emotional, this album is strong from beginning to end. From the first lines of the title track, Tha Wreking Ball grabs a hold and doesn’t let go. Cohesive and balanced, this album ranges from bangers to melancholy and introspective tunes. It doesn’t matter if you’re a Christian or not: this music breaks through barriers of perception.  The album clearly shows TWB’s lyrical, style, and overall talent and just when you think you’ve got him figured out, he busts into an almost Rock style on “God’s Not Dead”, that’s intertwined with Alternative sounds. He easily transitions into multiple styles with a great vocal range. To top it all off, TWB is an artist who allows Christ to work through him in many ways.

“Say Hello To Tha Good Guy” is definitely one of the hardest-hitting CHH albums I have in my collection. Some in this generation think Christian music must only sing of God’s love and salvation. TWB proves there’s so much more than previously thought. He gives humor, hope, heartbreak, hardness of heart, and love. TWB is a Christian, but he strays from artists such as Lecrae and Andy Mineo. Many of these artists have grown stale, filling their rhymes with repetitive preachy themes.  While I do respect these artists, their music seems to follow mainstream trends, aside from their Christian messages. Every song on “Say Hello To Tha Good Guy” is simply the best production quality you could ask for, matched with hard-hitting lyrics that are just too difficult to find in the rap game anymore. I think that everyone who listens to this album can find something to relate to with the lyrics.

Tha Wreking Ball is one of the few rappers that you can listen to knowing that you won’t be bombarded with four-letter words. Lose your expectation of what you think a Christian artist’s music or lyrics should be.  You can negatively nitpick anyone’s music, but if you want to hear songs that you can put on repeat without getting sick of them…this is it!

More About: Paul Sahagun A.K.A. Tha Wreking Ball started rapping in 1994, at the ripe age of twelve.  Ever since then, TWB’s songs and lyrics have mostly been split between mainstream/secular rap and Christian Rap due in large part to his strong Christian faith instilled by his parents. In late 1997, TWB did a small performance at a party, and it was then when his talent was recognized by a youth minister from Bakersfield, CA. Shortly thereafter, TWB performed at a small Christian Rap tour in Bakersfield. Since then TWB has made various recordings and performed all over the place.