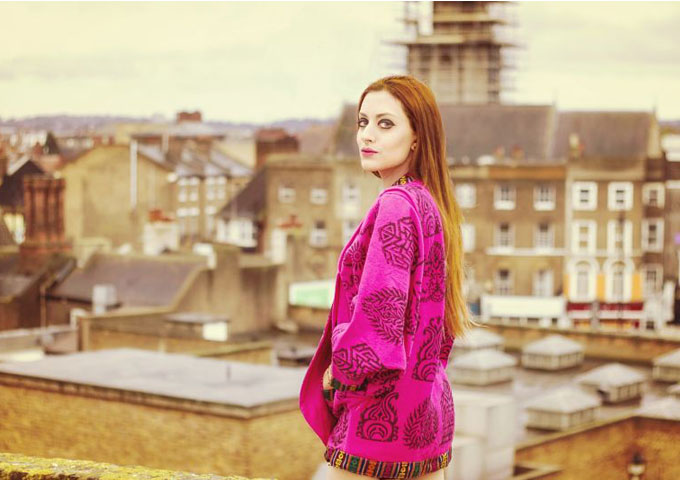 A London-based electro-rock project dreamed up by Beatrice Bonnano, Dronningen, which means “The Queen” in Norwegian, base their music on three guiding principles that can be heard and felt in the music and lyrics: 1) Getting rid of general negativity; 2) Dance as a purifying ritual; 3) Being the sovereign of your own world. In their three-track debut EP, Carry on Dancing, Dronningen channel these principles into an album that displays dynamism and passion while being a source of pure entertainment as well. Even though this group, which has several dedicated dancers along with musicians, is normally focused on live performances, their music itself shines on this recording.

The EP’s title track kicks off with a bright guitar-driven melody that crescendos into an amped up rock feel that screams Yeah Yeah Yeahs and The White Stripes with female vocals. The song drips with kinetic energy that listeners, whether they’re at the live show, listening on their headphones or rocking out in the car with the windows down, will enjoy nodding their head, dancing and thrashing around to. Bonnano’s vocals are magnetic, drawing the listener into a song layered with zany, rocking guitar riffs and traditional, driving rhythms in the percussion. Overall, the song is powerful and captures the quintessential rock sound of the late 90s and early 2000s.

In “Catskill Gravity,” Dronningen explores more of the electro-driven aspects of their dance-happy sound. Synths dominate the track’s melodies and the vocal’s backgrounds in the verses, but the rock guitar licks peek in as well. The mesmerizing vocals capture listeners with its anthemic chorus, wherein “gravity, “stupid” and “energy” bear repeating before dropping the last punchy line, “Your sound is boring,”—the theme of the song, whereas Dronningen’s sound clearly is not: “You’re wasting your time on Facebook /and my life / it is much more fun!”

Another electronic dance song with distorted rock riffs, “Heterodynamic” too explores the appealing way that rock and electro can combine to form irresistibly dancey songs thanks to the complex inner-workings of Dronningen’s musicians. Beatrice’s vocals continue to take on a Yeah Yeah Yeahs vibe throughout the album, including this track, wherein she sings about getting rid of an undesirable man, “I’m done with him / It feels a nightmare / I wear my scars / with pride and kindness / Inside this club / I’ll risk my chances.” It’s tracks like these that you can’t help but imagine a stage full of dancers rocking out to live.

While the EP only has three tracks, it only takes three songs to encapsulate the compelling sound Dronningen has created with dancing in mind, and the ultimate effect is that it leaves listeners clambering for more. If Dronningen’s hope was to inspire their album’s fans to experience the music live in concert, the band has knocked this one out of the park.