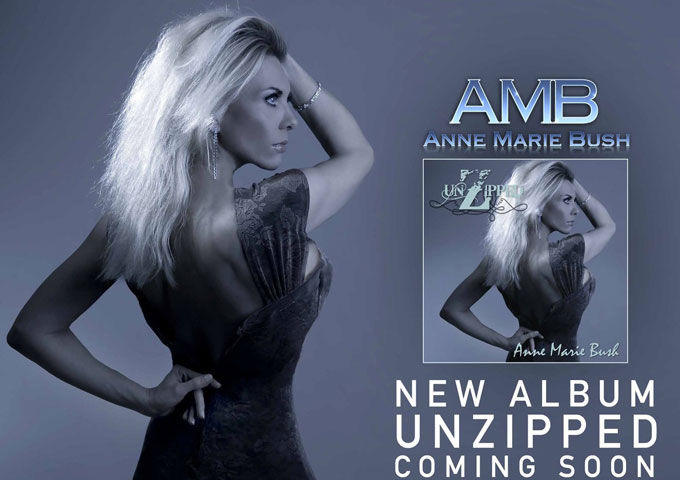 The new EP “UnZipped RnB” by Anne Marie Bush –the Danish singer-songwriter whose influences range from RnB, Motown, Soul, Pop, Jazz and Club – will drop on November 12th.  During her seven years in the US, Anne Marie attracted a lot of attention from international top producers, songwriters, record labels and other industry professionals, while collaborating with talents such as Narada Michael Walden, Bill Champlin, Tamara Champlin, Greg Phillinganes, Michael Caruso, Bruce Gaitsch and Robert Palmer, just to mention a few. Several of Anne Marie’s songs are also featured worldwide on TV and Film.

“I am ready to take my solo career to the next level by launching my new EP “UnZipped RnB”, says Anne Marie Bush, “On the current EP I am mixing the soulful pop ballads with groovy RnB, and basically returning to my Soul-Jazz musical roots. I have been writing, recording and producing the songs from the EP for quite a while in various studios, with different producers, including my own studio in Copenhagen, DK. Some of the songs have been re-produced up to 3-4 times.”

You can always tell when an artist throws out a record just to say they exist or have something new out. “UnZipped RnB” is definitely not that type of EP. From start to finish it flows wonderfully, and you can tell that a lot of time and effort went into producing a first class record. It’s been on repeat in my player for ten days, and I love all of the songs. Anne Marie Bush can definitely hold her own when it comes to singing and songwriting. Her voice is phenomenal, its range is amazing, and the variety of music is excellent. Lyrically speaking Anne Marie keeps it somewhat straightforward and heartfelt, but her delivery is what blew me away. Everything you love about soulful urban R&B music is plastered all over “UnZipped RnB”. Anne Marie’s lovely honey soulful voice is highlighted to the maximum on this record. Each song is a delight to listen to and will glisten the depths of your soul. One of the best songs on the album is “U Belong To Me”. The soulful sound is intermingled with a gonzo urban beat topped off with Anne Marie’s glossy voice. Another highlight to the record is “I Won’t Run Away”, a pop ballad accompanied by plenty smooth organic sounds and powerful strings, while Anne Marie belts out a soulful love melody that captivates the listener’s heart. “Wings To Fly” is another elegantly structured track that highlights Anne Marie’s strong vocals and so delicately balances itself between soft and loud rhythms. But just choosing one or two songs here and there is rather reductive, considering there is not one bad song in the bunch. On the contrary I only hear highlights. As I did on the acoustic-guitar driven “I Wanna Be”, or the Top40-styled ballad “Fly”.

Anne Marie Bush reminds me of a blend between Mariah Carey, Marie Fredriksson (Roxette), and Celine Dion. She has the vocal range of one, as well as the diverse pop sensibilities and the absolute power of the other two. No matter where you are in your life, when it comes to love, you will enjoy this EP. In my opinion almost every song could be a single here. If you are looking for a really soulful recording that you can play all the way through “UnZipped RnB” for you. Not only did Anne Marie Bush capture the art of real R&B music that comes completely from the soul, but you can feel the passion and soul that she puts into the lyrics as she sings. This is a very cohesive, high-caliber project which will undoubtedly move Anne Marie Bush career to the next level!