GoHomeRoger is a young new artist with experimental style in hardcore rap, cultivating other genres and sub-genres. Resembling artists like Ski Mask The Slump God, XXXTentacion, and Smokepurpp, with his musical diversity, he creates songs of different moods. Anything and everything exists in GoHomeRoger’s domain, it seems. It doesn’t matter the abstractness or intangibility – if it exists, and it can be tied into some form of pleasure or power, he will take control of it. If Drake is the emotional heart of hip-hop and Kendrick Lamar is the embodiment of its soul, GoHomeRoger is whatever part of the body makes you get lit, get fucked, and commit some atrocious acts on someone else, or inflict them on himself. 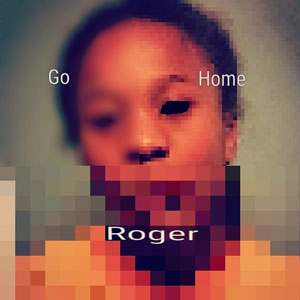 GoHomeRoger’s music is genre-bending and beautifully experimental at its best. At its low moments it is overwrought emotional writhing. Either way the kid is really good at this disturbed, raging, bass-heavy, explosive trap that mostly borders on alternative hip-hop.

XXXTENTACION is known for abrasiveness, alongside him, GoHomeRoger also has a distorted element to his music as well. It’s less aggressive, less metal, but more psychedelic, more traditional. The production is at its best when the lower end is given the space to shine.

The bass, alongside with GoHomeRoger’s bars both weave in and out with each other. The duality is extremely entertaining on “HoldYourBreathe (PROD. OK Geter)”. Whether he’s spitting over a subtle but prominent bassline or aggressively flowing over a beat that’s almost at a wall of sound level, the dynamic works.

While Ski Mask and his partner in crime, XXXTENTACION receives attention from casual rap listeners, GoHomeRoger himself is still focused on producing music for those underground hip-hop heads to enjoy. I think if he can build on his sounds and keep adding to his crazy flow, he could soon be in the alternative and experimental spotlight for quite a while.