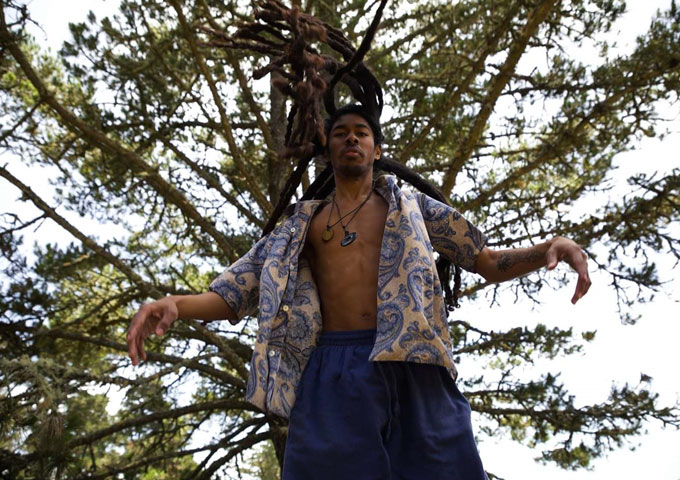 Jhaga, a rapper singer songwriter from South San Francisco California. He claims Jaguar Line of Oombunqtwu lineage which is built upon the principles of loyalty, honesty discipline, integrity, balance, perseverance and stamina. His latest project is the 10 track “Challenge” album. You can hear the hard work that was put into this recording. I wasn’t a Jhaga fan and haven’t listened to his past projects, but this album is an underground urban masterpiece. The production, rapping and content, flows so well from front to back. There are absolutely no filler tracks. That makes me a Jhaga fan, starting right now. He is an amazing artist who interweaves crucial life lessons into his bars. The motive behind the album becomes clear with every listen. Jhaga strives to express his truths through his music and the rapper achieves this perfectly.

Jhaga’s visionary attributes are revealed throughout “Challenge”, the rapper strives to look past the flashy rap lifestyle and instead focuses on uplifting and empowering people. And in the process he doesn’t leave behind harmony and melody. In fact he showcases it right from the first track, “Tea Leaves” produced by Scarecrow Beats.

Chill and soulful at the same time, Jhaga raps with the mindset of a clairvoyant. “Crazy” produced by Skye, quickly establishes the level of the artist’s rapping skills, as he turns in an intense performance with a machine-gun flow. Jhaga has a knack for painting pictures that emphasize the importance of hard work and getting through impossible situations, all while striving towards achieving your goals.

“Simple Things” produced by Scarecrow Beats, switches down the pace but not the emotional impact and melodic groove that drives the song through its description of the simple things which make life worth living. Guitars are usually not a well-loved instrument in the rap game, but is used to perfection here.

“Challenge” is a beautiful production overall. Some songs deserve to be mentioned above others, mostly for the well thought out verses, the unique sound, and lyrical content. One such song is “Blood Rights”. The song cages the listener’s interest because of its incredible storytelling which captivates its audience and sends them soaring into detailed imagery. “Challenge” produced by Skye falls into that same high-level category.  Beautiful lyricism and an impeccable percussion-driven beat invites the listener to understand the journey and to realize just what it takes to make it in this life. The lyrics are profound and rich, the beat is solid, and adds to the kick of the bars on “Dine with my Enemies” produced by Skye.

If artists would put half the energy and creativity into their work as Jhaga does, we wouldn’t have to hear about how broken the industry still is. “Old Homies” produced by DopeBoyzMuzic, brings another soulful and melodic vibe to the recording. “Growing Pains” produced by Skye, features another load of shimmering guitars as Jhaga’s gravelly delivery injects the track with raw grit.

The stripped rhythmic bang of “Rebel Up” closes the show down. You can hear in Jhaga’s voice that he is ready to compete and wanting to show more people what he’s capable of. One thing Jhaga does well, is keep his momentum going.

Intensity and aggression are tones he manages with ease, while also being capable of switching his raps up or down at will. Jhaga provides great insight and detail in this album. He really shows what he is made of, and will surprise a lot of casual rap fans as well as hip-hop heads, who haven’t heard him yet.