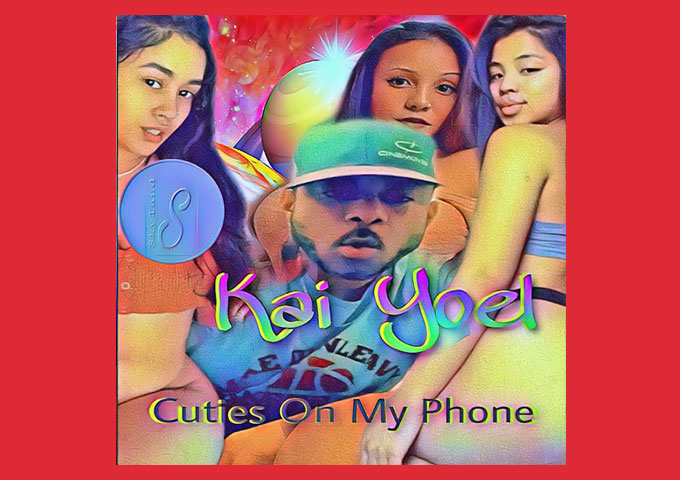 Phone calls first popped up as a major theme in Drake’s music when he included a real voicemail from his ex, Ericka Lee, on the Take Care track “Marvin’s Room” in 2011. Phones have played a key role in hip-hop and urban music ever since, with a number of artists using the device as a prop for in their tracks. Fresh in line is Kai Yoel with his latest single, “Cuties On My Phone” – a track he engineered, wrote, produced, and performed.

Kai Yoel was born in Los Angeles in 1997. He started as a DJ in High School, and by his senior year was creating Party Playlist Links. Some of his influences are Migos and 2pac. He has done projects with such artists as Madd Maxx who is featured on “Killaz on the Payroll” on the Luniz album, “Lunitik Muzik”. Kai Yoel is also featured on “Da Boss” by Ricky Rozay available on Spotify.

Engineer and Singer, Kai Yoel, uses his phone on “Cuties On My Phone” to bring us a whole bevy of beauties, smooth and sultry vocals and a slow banging beat. While rap and hip-hop are often described as visceral expressions of youthful energy, Kai’s music is the decidedly cerebral and emotive other side of the same coin. He delivers a naughty groove to excite the hormones.

It might be tempting to throw the explicit label his way, but that’s reductive, especially in an era where the term is used pejoratively and pronounced by self-righteous and pedantic knuckleheads. For Kai Yoel, as evidenced by his new “Cuties On My Phone”, being smart doesn’t have to mean being stiff and relying on the usual leitmotifs. Sure, he’s dealing with the usual hip-hop tropes, but he’s framed them in a whole different picture.

When it comes to vibe-infusing music, replete with sexy visuals, Kai Yoel’s cup runneth over. Just check out the video for “Cuties On My Phone”, to get the gist of what I mean. Unlike many of his pretentious contemporaries, Kai doesn’t makes abstract theories, his existence is palpable by relating them to tangible things, and big concepts get repackaged as physical delights we can feast our ears and eyes on.

Kai Yoel sings in softly sweltering tones – his inflections are mellifluous, his flow smooth – as he lays down his distinctive narrative. The basslines rumble, and the drums slap, while the futuristic keys twist in an out of the mix, all within a production that pairs perfectly with the vocals.  Buoyed by the course of the slow-burning rhythm, Kai weaves in between the thought-provoking lyrical knots, while taking time out to find the groove.

Everything on “Cuties On My Phone” is slowed down and amorphous, offering an immersive listening experience that creates the sensation of being hidden in a closet while hearing a private conversation between Kai Yoel and some of his intimate friends.

The song is as enjoyable as it is mesmerizing in execution. A solid stab at a recurring topic so well- known, and discussed in music, Kai has found a novelty way, of further developing this always intriguing theme, in “Cuties On My Phone”. Who knows what his got up his sleeve next?

Kai Yoel can be reached kweezieus@aol.com