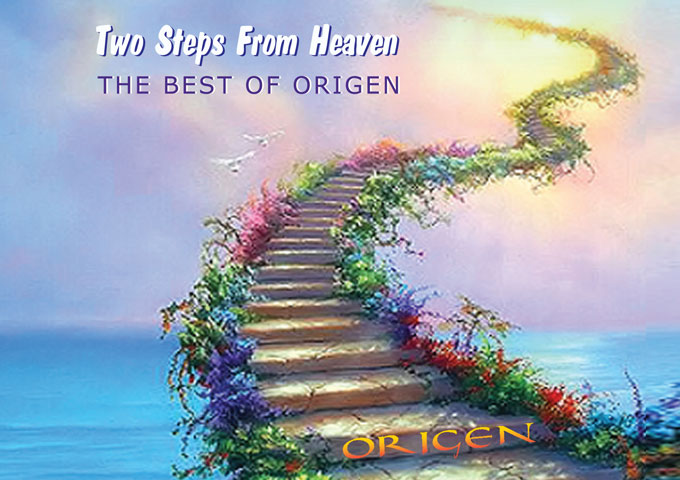 The project Origen, was founded in 1995 by composer, producer and sound engineer Alexsey Zakharenko from   Kyiv (Ukraine). At the end of 90’s, Zakharenko wrote some songs for the young singer, Tanya Lubimenko, of the Ukrainian National Opera House Milana, and later produced her debut album “They Beat a Women”. Zakharenko was amazed by Tanya’s talent and her ethereal voice that he invited her to a creative collaboration that has been going on for 15 years. In fact Tanya has appeared in various albums composed by Origen, and can be heard in “Two Steps From Heaven. The Best of Classical Crossover 1996-2013.”  This album contains the best songs from all Origen’s albums and some bonus tracks which were not included in any of his previousCDs.

“Two Steps From Heaven” is a very beautiful album with 16, some of which will be familiar to anyone with even a passing interest in classical music. The selections are lovely, soothing and peaceful, as Zakharenko brings Classical music into the 21st Century New Age era. This album covers the sound Origen has been doing since the start of his career. It has a very dramatic flair, and a sense of momentum and power, while at the same time exuding a gentle, soothing and ethereal nature. It is the very essence of what he achieves by crossing Classical music with modern New Age and Ambient flavors.

“Two Steps From Heaven. The Best of Classical Crossover 1996-2013”  delivers a true musical experience. This collection of musical arrangements is utter perfection. The type of physical and emotional feeling that you will receive from these interpretations, both musically and vocally, is not easily expressible in earthly words. I urge you to listen and be whisked away to a place where we all belong. Each track of sounds offers something beautiful and just as indescribable. Glorious, heavenly, celestial, esoteric: these are just a few words that come to my mind when trying to explain this music.

Origen gives a thorough and personal working over to Donizetti’s “Una Fortiva Lagrima”, Handel’s “Lascia Ch’io Pianga”, Mozart’s “Lacrimosa” and “Ave Maria”, among others. He also tackles Beethoven’s sonata #8 for piano, aptly entitled here as “Beethoven’s Solveig’s Song”. Obviously these pieces would never be complete without Tanya Lubimenko, whose voice is possible one of the most beautiful voices on this planet. Her singing wafted to my ears like a melodic and healing balm, the harmony and perfection of each vocal rendition so comforting and embracing. Origen and Tanya have crafted a masterful collection of music that just makes you feel better, and calmer, about being exactly whom and where you are. It is, perhaps, accurately characterized as the ambient sound of well-being.

But Origen’s music is so much more, than just recreating classics. Creating music in the purest sense, is piecing together notes which are born in the soul, take their first steps in the heart, and are given flight through a musical instrument. Nowhere is that more evident than with what Origen accomplishes on tracks such as the “Kyrie Eleison”, “Dance of the Clouds Part 1+2”, “Tears of the Past”, “Heavenly Blue” and “Piano Dreams”. The songs are admirable masterpieces and pleasant music to listen to. The melodies that can be found are filled with beautiful emotions, they are gentle and interesting, and transport you to a state of complete harmony and relaxation. There are elements of early romance and impressionist periods in the compositions, but with modern approaches to score and voice among instruments. The music lets emotion lead, but does not ignore structure and sways between ambiance and melody with grace and intent.

Another aspect that really grabbed my attention is the production. There are some subtle changes from piece to piece, though the overall collection is coherent and true to the nature of the works. If you’re looking for a great addition to your music collection that can be used in a variety of situations to add a calming, relaxing, soothing ambiance, this is for you. It however, is not to be confused with simple ‘elevator’, or ‘background’ music. Origen’s crossover creations, comes from a higher artistic, emotional and intellectual place, and in turn requires a more engaging listen, to be fully appreciated. “Two Steps From Heaven. The Best of Classical Crossover 1996-2013”  is the epitome of what modern day classical music should sound like, if at all it desires to be adored by the masses.