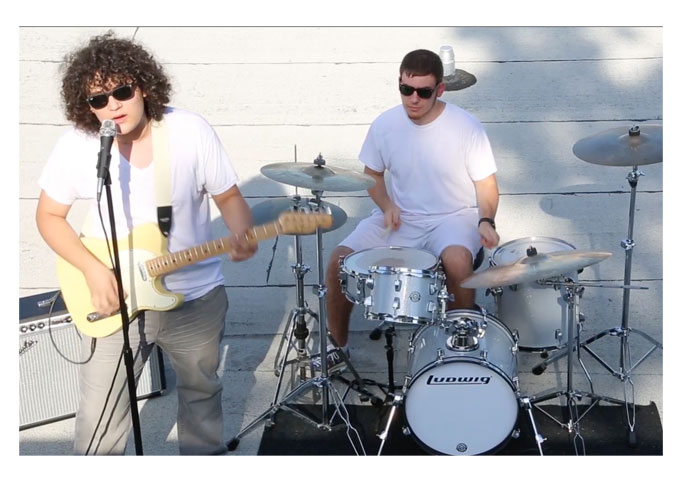 The beauty in the new The Inoculated Canaries single, set for official release on the 23rd of October, lies in the way in which it navigates dynamics, songwriting, and performance energy. Even in its mellower moments, “Don’t Be Late” brims with a subdued tension that is only relieved by explosive energy. The way in which bandleader, songwriter, guitarist and singer, Michael Rubin and his cohort, on drums, bass and saxophone, James Terranova, navigates the dichotomy between soothing lullaby and devastating intensity within song form, expresses a compositional maturity that belies the classic rock format within which they would be more easily categorized.

This kind of compositional expertise could only be expected by technically efficient, matured and navigated musicians, which is certainly the case here…with the exception of the fact that the band’s front man and guitar virtuoso, Michael Rubin, is just 16 years old! Michael, who is a an AllStar at The School of Rock Rockville Centre, started playing the guitar at the age of nine and has since began an artistic journey filled with important milestones, which includes graduating from The School of Rock, touring extensively, attending guitar sessions at Berklee, and teaching 4th and 5th graders in their after school music program.

The Inoculated Canaries whose debut EP is entitled, “The Blue Laws” are gearing up to release their follow-up 5-song EP, to be produced by Dante Lattanzi, the CEO and Founder of Caelum Music Production, in November this year, while the upcoming single “Don’t Be Late”, will be its teaser single release in October. It is a recording that shows tremendous proficiency in songwriting and musicianship.

Much like his main artistic influence – David Gilmour, Michael Rubin composes and plays tastefully, above all other things. Yes this is rock, and yes there is infectious energy, but there are no wasted notes, superfluous chord progressions or overused riffs; a Gilmour and Pink Floyd prerogative that Rubin has picked up almost naturally within his songwriting and performance style.

On first listening, “Don’t Be Late” slides through from start to finish as an almost easy listening experience. Now listen again: catch the sneaky basslines, those sleek guitar chords and tonality, the clean-as-a-whistle lead solo, the snappy hard-hitting drums, and best of all for me, the succession of stop-start progressions on the closing bars. All this makes “Don’t Be Late” a defining song that really shows off these guys as not only a great band, but great musicians as well.  It is not often that great natural talent is found this quickly, so early, on in any musical career. Can’t wait for the EP!