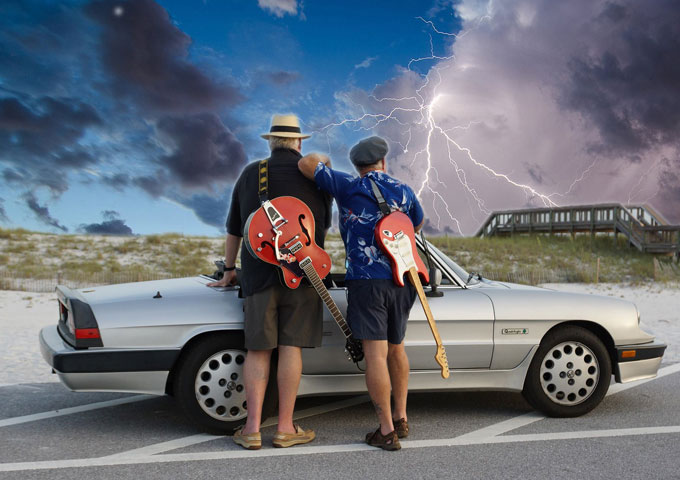 The eclectic country band, W.B. and The Geezers is comprised of two Navarre area musicians – William Lake and Bill Crouch, – who have decided to embrace their coming second childhood with instruments and drinks in hand; from the ridiculous ED commercials and senior dating, to the effects of the wars of their past, the band write, play and sing with experience and heart.

Les Ladd the retired RCA producer and engineer mixed the master of W.B. and The Geezers’ brand new album, “You See Old.. I See History”, which was recorded at Coleman Studios in Navarre. Les Ladd was the producer and engineer for The Outlaws, George Strait, The Oak Ridge Boys and many others.

The 12 songs on “You See Old.. I See History” are totally in the pocket, with a mix of honky-tonk, ballads, and a few contemporary songs to keep up with the newer Country generation. Not because they have to, but because they can do!

For me, W.B. and The Geezers (whom I’ve never heard of before today!) is in a class of their own. Comparing a W.B. and The Geezers album to the album of any other artist in country music is simply unfair…to the other artists, since none of them get close to the tongue-in-cheek sassiness of these fellas – not by a country mile. Sometimes playful, and at others bitingly sharp, the boys smother their astute lyrics with stirring melodies and sharp musicianship.

W.B. and The Geezers are troubadours par excellence. All they need to do is sing the song and let the story tell itself. This is what the ‘Geezers’ do better than anybody, and it’s the secret of this album. They know that a good song does not need to be over sung or too embellished, and they have the confidence, skill, and good judgment to sing and play every song not too much, not too little, but just right, so that the listener can feel and enjoy every tune without frills, gimmicks, or theatrics.

I have no doubt in my mind, from the conviction in their singing that W.B. and The Geezers have been any and everywhere they’re singing about, and it was further back than just yesterday too. Containing thematic and musical echoes of their experiences, W.B. and The Geezers tell it all, from romance to war and everything in-between.

I didn’t think their ages and the changing industry would make it possible for an independent Country album release of this caliber, as track after track hit me hard with emotion.  Besides the cheeky and gritty nature of catchy songs like “Shout to the World”, “I Got the Nut” and “Round Bottom Girls”, it’s the more somber tracks like “Children of the Streets” and “That’s Why it’s Called Pain” that truly captured my attention. W.B. and The Geezers obviously just keep getting better and better through the years.

With each subsequent song on “You See Old.. I See History”, W.B. and The Geezers prove that they are as relevant and talented as ever. Their singing always seems so effortless but at the same time very effective in delivering the message of the lyric. As they mix the soft and subtle on “Ocean Blue”, with toe tapping and boot stomping on “Diamonds and Coal”. This album has so many good songs that you’ll just want to listen over and over again!

***For a limited time fans can also download mp3s of W.B. and The Geezers’ 2014 EP “Don’t Want To Dream” at their Reverbnation page for FREE.