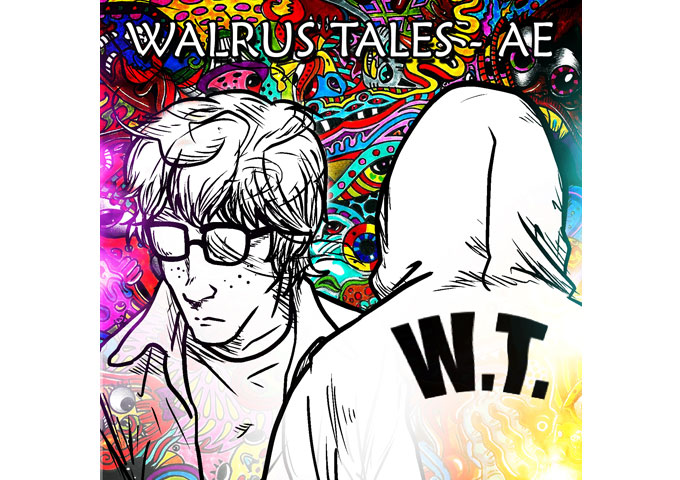 The “AE” EP expands greatly on the single “Drifting”, which we reviewed a couple of months back, fulfilling another piece in WalrusTales’ musical journey. Was it worth the wait? Certainly.  I like “AE” a lot, and I’ll tell you why. It does what only great music can do well. WalrusTales, can, and does on many of “AE” tracks, create music that encapsulates a mood in its entirety. This is a tremendous feat and a sign of musical maturity.

Each track on the EP flows along and leads into the next one so well. Lyrically “AE” can hold its own, but it really shines musically. There are so many layers of sounds that blend seamlessly to create each song. The complexity, emotion and power of WalrusTales are even greater here. The track that stood out the most to me, art from the previously released, “Drifting” was “Second Space”, which is one of the most powerful yet beautiful pieces that WalrusTales ever put together. It just keeps building and building with the falsetto vocals until it all ends with what we began with, the static and a different synth riff.

“Lil Codetta” is a little less accessible than the other tracks as it is a minimalist artistic expression, which requires multiple listens to become accustomed to. However, “Emails From Home”, quickly makes up any lost ground with an urban edged rap performance that will capture many ears.

“AE” shows a more open, vulnerable, eccentric and original WalrusTales that have a better grasp on their music and what they want out of it. The emotions of the falsetto vocals and the keyboard sounds are hard to deny while the complex melodies are quite infectious. Suffice to say that each song has the ability to take the listener to the worlds that Andy E and Wally T have been, to the places and the emotions that have been experienced. This is absolutely true of “Drifting” which is an intriguing song to say the least.  The lyrics flow in an extremely poetic manner throughout the EP, as the vocals lift from gentle passages to screaming ultra-highs.

I could go on and on about all the things I love about “AE” without proclaiming that it’s a perfect recording in every sense, but you either agree or don’t, so I won’t waste our time. “AE” sort of drifts you along each track at a slow and steady pace, capturing your attention piece by piece, until it has totally possessed it. So grab this EP, turn the lights out and listen, you’ll be better for it.

More About: Andy E and Wally T, from Pittsburgh make up Walrus Tales. Currently based in Miami, they both left college to pursue a career in music. Coming from a love of both Edm and Jazz, they seek to bring complexity and intelligence to electronic scene. They also operate on a schedule of “vocal honesty”, leaving their vocals nearly raw in their studio based projects.