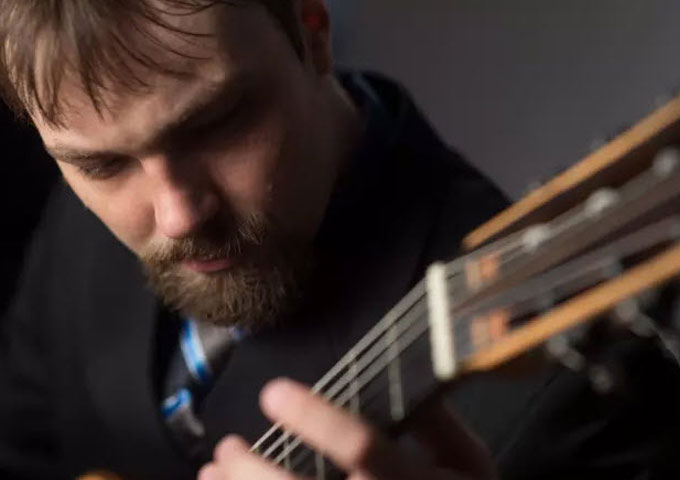 If you are enchanted by great classical guitar music and an emotional prisoner to Segovia, John Williams, Holzman, Pujol, Saul, Ayala, Guastavino and company, then you must have the collection, entitled “Guitar Night” by Brad Rau. Brad has a great and deep sensitivity to the classics and what the guitar can render. There is such a variety and depth of feeling to his work, and the range of compositions on this album are executed beautifully by Brad. He is up to the task of every mood, every pace, and every interpretation. This is truly a “must-have” classical guitar album. Apart from the “String Quartet Op 12 II” by Mendelssohn and “Prelude and Fugue BWV 995” by J.S. Bach, the rest of the compositions presented in this compilation are by Latin composers like the Argentinian Jorge Morel, the Brazilian Heitor Villa-Lobos, the Venezuelan Antonio Lauro and the Spaniard Francisco Tarrega. In performing their works Brad Rau’s interpretations are superb in everything – depth, virtuosity and sound.

Playing these pieces requires more than just excellent technique. The performer has to capture the darkness in the light passages, like a yearning in moments of gaiety. And then also, capture the light in the dark passages, as a ray of optimism in moments of sorrow. Rau captures all these emotions profoundly in this highly recommended collection.

Brad Rau expresses the psyche of 20th century classical guitar with his magical interpretations and through his ability to capture every single note, every little sound, every subtle harmonic, and every little tremolo.  If you know anything about the composers or the compositions to be found on this album, you should get hold of “Guitar Night”.

You will notice that Rau’s playing is not just about feeling but about understanding what this brilliant music is about and how this unsurpassable instrument, the classical guitar, should express itself within the confines of these compositions. If you like both beautiful melody and rhythm of the Latin American sort, you will like this recording and especially tracks such as “Valse Venezuela No 2” by Antonio Lauro and “Valse Venezuela No 3” by Antonio Lauro, as well as “Etude 7” by Villa Lobos. If on the other hand you like solo classical guitar of the supremely virtuosic sort, add that into the equation too, and take in pieces such as, “String Quartet Op 12 II” by Mendelssohn or “Prelude and Fugue BWV 995” by J​.​S. Bach.

All these pieces however, are played with an uncanny rhythmic precision that does not sound mechanical. They are played elegantly, eloquently and with feeling neither overstated nor understated. Bear with me, because it is impossible to do justice to this beautiful recording with mere words.

Brad Rau is an exceptional classical guitarist and his exploration of guitar music always presents a winning body of work. The recording is extremely clear, capturing all the warmth of the instrument. Rau discovers and conveys musicals worlds unknown to some of us, with precision, honesty, and mastery, allowing the work to speak for itself.

MORE ABOUT: Brad Rau has been performing music for over 20 years all over Boston, Pennsylvania, New Jersey, and Delaware, as a classical guitarist, rock guitarist, and rock drummer. Brad received a scholarship to attend New England Conservatory (NEC), and received a Master’s degree in 2015 with academic honors. At NEC, he studied classical guitar under Eliot Fisk who was the last pupil of Andres Segovia. Brad has performed in countless masterclasses with instructors including; Sharon Isbin, Andrew York and Jason Vieaux, all Grammy award winning guitarists.

Brad’s personal learning methods have enabled him to surpass his competition memorizing over 8 hours of the most difficult repertoire for the classical guitar. Brad was a semi-finalist in the International Texas Guitar Competition of 2008. In addition to his performing career, Brad has mentored hundreds of students of all ages, styles and levels. Many of Brad’s students have gone on to develop their own music careers and teaching studios.