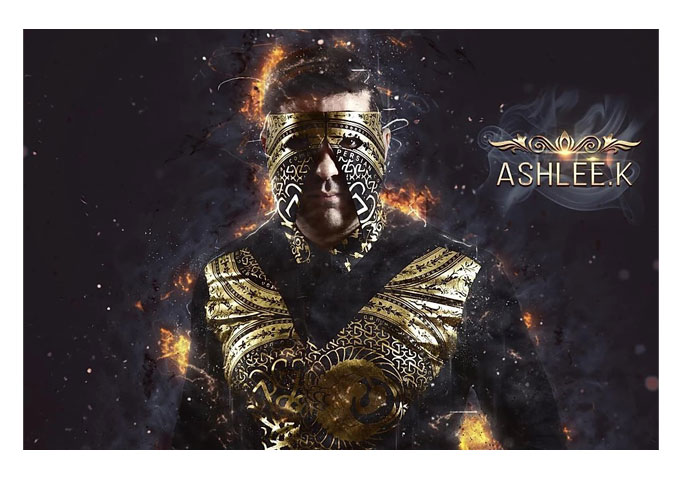 Ashlee.k went against his parent’s desire and learned to play the guitar didactically, launching his first band at 18. He took interest in flamenco and classical guitar, and founded Octave, his first professional band, and gave many concerts as well as launching an album. Academically, Ashlee.k has studied music theory with the focus on Rock, Jazz, and Blues at the ‘Conservatory of Music’ academy. He was producing and composing music for the underground as well as major artists.

Because of his work, he came in contact with a varied range of musical input, which finally led to his detection of electronic music. After taking up electronic music, Ashlee.k has never turned back. His work carries influences from many genres: Eastern Folk, Classic, or Dubstep. Ashlee.k presents a more than harmonious blend of contemporary EDM, folk and classical elements as well as interesting Dubstep vibes. Germany based master of EDM music Ashlee.k takes EDM to a new level with uplifting productions.

In the beginning, I started as a music player. Then I began to make melodies for my solo parts for my performances. That was when I realized making music was enjoyable to me and from then on I concentrated on making music.

Ashlee.k: It was the case for me as well. Due to my parents’ disapproval, I started this without training and just by listening. In the first phase, I did my best to imitate gurus when I played the guitar. I’d try to do it like them. Gradually, I found my own style.

Ashlee.k: I have done various genres and have learned quite a lot. There is no point in sticking to a certain genre. I try to exploit the features of various genres in my music without boundaries.

Ashlee.k: It totally depends. Sometimes a rhythm in my mind, sometimes a melody or sounds I hear somewhere leads to producing a piece of music.

Ashlee.k: As I said earlier, I’m interested in many different genres and try to make use of them in my music without any limitation. However, electronic dance music is what I am basically passionate about.

Ashlee.k: I’d try to use different elements in my music. However, the main ingredients in music are EDM’s.

Ashlee.k: Getting started in music and learning without any support.

Ashlee.k: You can refer to the previous answer. Since I’ve done this, I’m totally proud of it.

Ashlee.k: This career is packed with challenges. If this is what you want with all your heart, you’ve got to hang in there! Quite a few things change with the passage of time which brings about a lot of accomplishments.

Ashlee.k: My first software program to produce music was the early version of FL Studio. Yes, 100%. I have a lot of gear at hand now, i.e. Ableton Live, Cubase and many more plugins and other pieces of hardware.

Ashlee.k: Naturally, the way fans receive my music positively and even the messages I receive makes me happy and enthusiastic to want to carry on. I try not to become disappointed and keep it up!

Ashlee.k: As I said, I’m totally happy with it. I know a lot of artists who could present their work and talent through this and find their real place. Nevertheless, the number of people who have nothing to present and have cluttered the internet up with hogwash has increased as well!

Ashlee.k: Sure. My latest music was “Keep Shaking It” which was a mixture of rap vocals, eastern melodies, flute and Darbuka Rhythm produced in EDM style.

Ashlee.k: Picking out a track is quite hard. I’d say “Loving You Easy” could be a decent choice.

Ashlee.k: As for artists, Ariana Grande or Selena Gomez and as for producers Steve Aoki and Zedd would be my choices.

Ashlee.k: I have planned several goals for 2020. I’d prefer to talk about them after achieving them, though.

February 6, 2023
Wes Dean's "Want You Bad" is your not-so-classic love song with a twist of desire…