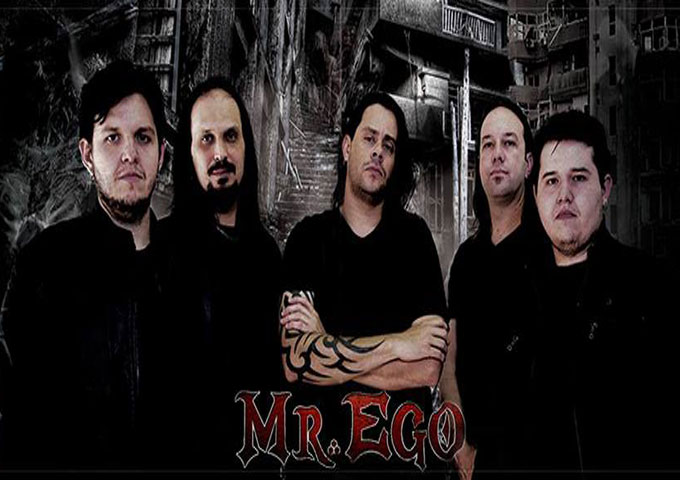 Mr. Ego is a prog metal band, formed in 1995, in Ribeirão Preto-SP, by bass palyer Paulo André. Since then, the group has gone through several formation changes, accumulating over the years, the experience of having performed in several important venues, and earning the respect of public and critics.

As proven by the many positive reviews major sites and magazines, specializing in heavy metal, from Brazil and abroad have given the band. The band is formed by Paulo André (bass), Ricardo Longhi (drums), Igor (Keyboards), Iuri (guitar) and André Ferrari Anheiser (vocals). Mr. Ego has come a long way. From humble metal roots they have progressed through a myriad of sounds and styles, all the time pushing the borderline of metal, and becoming one of the most progressive, innovative and original bands in the genre.

Somerset Maugham once wrote that there are two kinds of artists in the world. One type of artist will create something with their emotions poured out. Another type of artist creates a piece of art through using their brain. Mr. Ego walks along the borderline of both on their album, “Se7en”.

Appreciated for their technical prowess, Mr. Ego also knows how to hypnotize listeners with their apocalyptic jams, as the open the album with the thrashers, “Fall On Our Knees” and “Broken Walls”, stuffed with tempo changers, electrifying shredding and soaring vocals.

Guitar riff and melodic vocal enthusiasts will fall in love “1917” played in the best Black Sabbath tradition. There is an amazing infusion of groove added to each and every track, seamlessly infusing the sound with their already jaw-dropping, calculated Progressive Metal time signatures. Influences from bands like Tool and Mastodon come to mind frequently throughout this recording.

In “Deceived” the bruising intensity of Mr. Ego’s terrific, brutal anvil bounce is definitively augmented by the blissful delivery of André Ferrari Anheiser’s vocals and soaring choruses. While the complex power of the Brazilian band’s music unquestionably stands tall on its own, the slow absorption of the one-minute gentle soundscape that is “For The Last Time”, adds an inescapable, virulent layer to the whole sonic experience that follows in the form of “Injustice”. In fact, I found that the music comes fully alive, in an unmistakably full moon of controlled hysteria. What makes this album so interesting is how distinctive each of its songs are. Every track has a feature that is unique and immediately identifiable. The songs themselves are incredibly dense, but some tracks are actually more accessible than others. Take “Black Gold”, it is as straightforward as they come, but devastatingly heavy.

I could write pages about each individual song, but there are some obvious highlights. Mr. Ego are making the music they want. It’s pure creativeness, and this band has no hidden agenda or fashion statement to make. They can also switch from the total head-banging and go into sheer melodic-rock ecstasy, as they do on the mid-tempo ballad, “Tears Of An Angel”.

But where Mr. Ego truly excels is on the 3-part track, “Silence Of The Lambs” – a mastering of extremely dense and technical metal. Despite the fact of Mr. Ego’s crushing display of technical power and polyrhythmic attacks, the song remains highly accessible because throughout, the band maintains a strong thread of melody.

The album, “Se7en” is experimental and technical enough to appeal to progressive metal snobs, but it is also accessible enough to attract the masses. This band deserves more praise than it gets, and it certainly merits even greater popularity. Whether or not “Se7en” may procure the mass appeal it deserves, is still to be seen, but maybe it will set the stage for Mr. Ego’s next album to dominate the world of progressive metal!