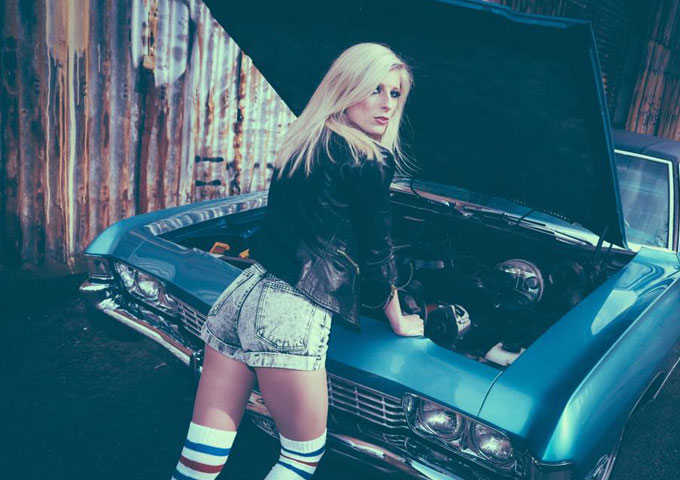 Noa Opdebeeck was born in Antwerp, Belgium. She released her first English-language album, “NoaNeal – Naked on the inside” during 2003. In early 2008 she toured the United States, Mexico and Thailand with hundreds of musicians from 28 nationalities in the ‘Up with People’ tour. In 2009 she reached the finals of the K2 K3 talent show. In 2010 she was picked up by Live Entertainment and from 2012 she became one of the leading ladies for the VTM music channel. In 2013 she moved to the United States with her producer Ellie Wyatt to write songs and record them with well-known producer Mighty Mike.

In fact, “Graffiti”, her latest single was recorded in LA with Mighty Mike (Katy Perry, Carly Rae Jepsen). I was blown away at the sophistication Noa shows in this song and how she is displaying even further growth in her artistry and personal self-coming through the song and its supporting video. The melody and uplifting energy of “Graffiti” just pulls deep inside you and you really “feel” the song instead of just listening. On watching the video the experience is even more overpowering.

“I love the song and was looking for a unique way to capture its spirit in the music clip.” said Noa Neal who co-wrote “Graffiti” with an international dream team: Ellie Wyatt (VK), Phillipa Alexander (VK) and Mighty Mike (VS).

In the meantime Noa Neal had been chosen by Intel for a unique project; the world’s first 360° music clip. Only a few days after Mark Zuckerberg announced his plans to treat your Facebook News Feed to an “immersive, 360-degree video experience”, the world’s first 360° music clip in 4K had been launched with Noa Neal and her song “Graffiti” as absolute protagonists, along with the 360 degree viewing experience of course! The resulting production is BIG and envelopes the viewer with a modern-day visual version of what the Phil Spector wall of sound used in the 60’s, was to audio – a true game-changer!

Although only 6 cameras were used – Facebook needs 24 – the viewing experience is truly immersive: with complete control over the camera, each viewing is completely different. Noa Neal’s “Graffiti” was produced in close collaboration with technology giant Intel.

For experienced producer Frank Molnar, this gigantic project was a fantastic challenge : “We had about 100 people cast and crew present – a stunt team, cheerleaders, skaters – band and there was no room for error since the clip was shot in only one take. A special film truck had to be brought in from France and the Intel experts provided great technical support.”

Proof of this intense collaboration with computer chip manufacturer is the “Making Of” which will have its global launch today on iQ sites, Intel’s online lifestyle and technology magazine.

Kurt De Buck, Social & Community Manager EMEA: “We are tech freaks at Intel and iQ is where we show what’s possible with technology. Creating the first 360 music video is a great example: with 64k-cameras, an impressive computer and the ‘stitching’ software we translated the enthusiasm of Noa Neal and her catchy song Graffiti into an overwhelming viewing experience.”