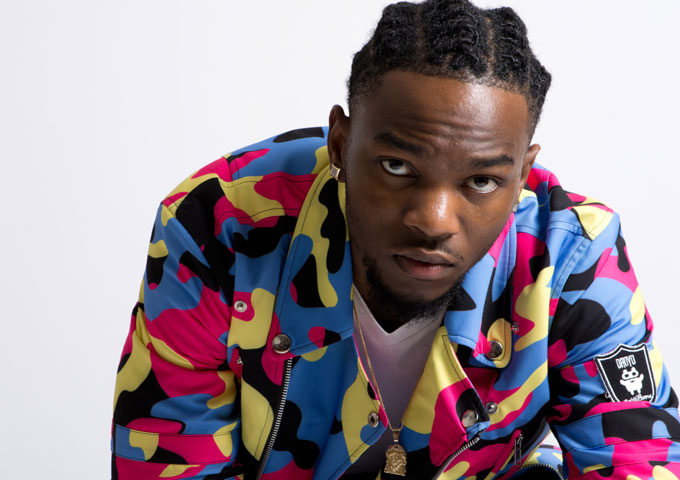 Setto has been carefully and steadily garnering supporters, with a string of hit singles and the much-heralded debut mixtape Coming to America under his belt. Born Trevor Osagie in Edo State, located in western Nigeria, young Setto moved to the States at 14 with his father and settled in the Atlanta suburb of Dacula. “When I first came here, I could speak proper English but I wasn’t strong in my English. I still had that African accent so people didn’t accept me for who I was. That was a battle I had to fight,” explains Setto.  “Somebody tried to clown my culture, calling me ‘African booty scratcher’,” Setto recalls. And fight back he did, eventually earning his respect.

One aspect of American life that needed no adaptation for Setto was with the music. He discovered his natural musical abilities while visiting his aunt and uncle in Boston one weekend. Introduced to a local rapper, Setto ended in a booth inside a studio, to record a verse.

When he got back to Georgia, Setto set up his own studio in his uncle’s basement and began recording his own music as well as other aspiring rappers in the area. This led to his first single, “Swag Still Killin Em” in 2009, followed by his debut mixtape Coming to America in the same year.

The current laws of fame mandate that if you’re wanting to be popular or a part of something popular, then you better stay active and produce for the public, and that is exactly what Setto does. Since relocating to the Bronx, New York, Setto has released a string of singles leading to last year’s smashes, “All of These” produced by Diego Ave, and “GO Hater” produced by Pierre Medor. In 2016 Setto has dropped a series of Freestyle tracks leading to his latest piece “Fvck With Me” produced by KashBeats.

It’s clear that this latest release is lyrically a personal track as Setto tackles life’s problems head-on with his pen and paper. He deploys his voice much like an instrument rather than a sound effect. Where other rappers find themselves stringing along halting, chant-like lyrics, often paired with jarring transitions, Setto’s songs are effortlessly melodic and composed with an obvious attention to hooks, bridges and verses; he knows when he needs to snap into his flow before delivering the goods in the chorus, while his verses are just as much felt as they are understood.

Setto has stayed true to himself, his story, and his style. To me, that’s what a true artist does and he deserves respect for this.  His narratives in his songs is a clear reflection of who he is as a person and his experience of having a hard time, and being comfortable with himself and his identity.

Sonically, Setto has always had great taste in beats, but he has noticeably stepped it up with the production on his newer projects.  Step by step, he is moving forward towards finding the perfect balance between using superbly composed musical productions and firm, uncompromising vocal delivery.

Each year we watch acts like Setto rise from nowhere to captivate the world with their infectious music. His narratives prove why hip-hop is one of the most exciting and unpredictable genres in music. Where he goes from here depends largely on how the industry interprets his talent.

With that being said the fact that he is only 24 years-old, gives him a lot of time to experiment with his sound and create an album that is of absolute quality, and which will shock the market out of its current state of lethargy.

One thought on “Setto: “Fvck With Me” produced by KashBeats – a clear reflection of who he is!”