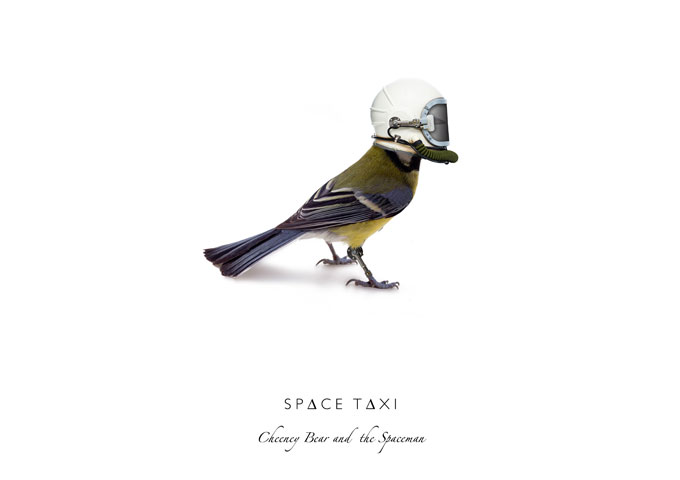 “Cheeney Bear and the Spaceman” by SPACE TAXI is one of those once in a while albums that comes along where you love the whole thing and it marks whatever time period you discovered it during as a positive, warm time. The album harkens you to a time when everyone was welcome, you knew your neighbor and one more was always welcome for dinner. The sounds are as good as the best home cooking and it makes a great soundtrack for long rides. Everyone in the car will ask who is playing and the title of the album, which will make you feel chuffed for being the first one among your friends to find it!

SPACE TAXI is a group of brothers from a small town in Colorado and a small town outside of Barcelona, Spain. The group who have a passion for storytelling, brewing up tales of adventure, worldly vices and the supernatural, have been described as quirky, uproarious, and energetic, while fusing rock, folk and other genres. Of the new music that I’ve heard this past year, this album sticks out as a true original. There is a lot of power and emotion in the lyrics and in the way each song is executed. You get a real feel for the members of the group and the group’s dynamic and organic sound.

Paul Lloyd (Acoustic guitar), Christopher Lloyd (Ukelele), Dani Luna (Bass), Jesús Luna (Electric guitar) and Sergi Moreno Muñoz (Drums) deliver tons of energy and good vibes to support the triple threat vocals provided by Paul, Christopher and Dani.  There are many absolutely mesmerizing pieces crammed into “Cheeney Bear and the Spaceman”. I listened to it three times the first day. Each time I listened to it thereafter was a spellbinding experience. The skillful, creative genius at work is readily apparent at first listen, and I felt drawn into the depths of song after song with continued listening. I am not easily moved by musical outputs, as much of it is mundane and repetitious and uninspiring. But the sometimes subtle, artistic genius at work within many of these songs washes over you gently at first, and then begins to explode dazzlingly within your mind as your appreciation and awe grow and grow with continued play.

No doubt SPACE TAXI is very special, and put an enormous amount of feeling into their music. The record shifts from subtle woozy hypnotic alternative rock to overt neo-folksy revival, channeling a mystical mashup of electric and acoustic, of which “War Boy” is a perfect example. This is one of those genre busting bands that you can’t put a tag on. And one listen to disparate standouts like “Thank You But No”, “Cosmic Anarchy”, “Bugout”, “Porno Couch”, “Crystal Lake” and “Rameses”, more than proves the point. Though similarities to a blend of The Raconteurs and Edward Sharpe and the Magnetic Zeros, can be found, I feel that SPACE TAXI is pretty much in their own thing distinct dimension.

This is great musical soul food. You are going to want to have the glory of making all your friends hear SPACE TAXI prior to them becoming insanely popular!