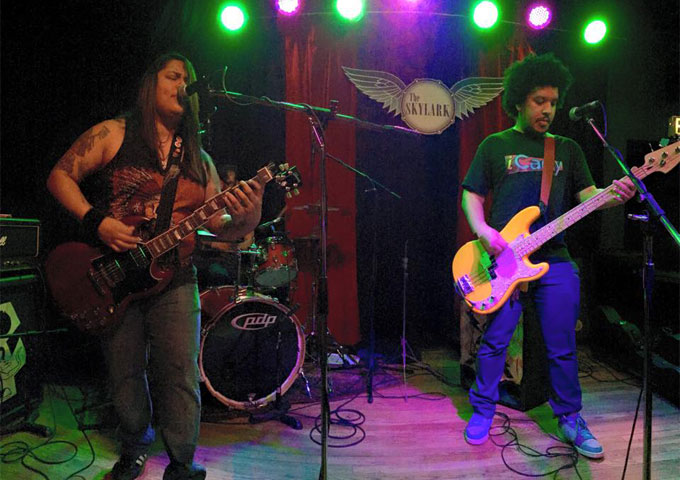 The Seattle-based punk rock band, Suburban Vermin, is set to release their new full-length album, ‘Headless Over Heels.’ And in addition to the 12 new songs, the band will be releasing a new music video and a companion comic book. The band consists of Amanda Gamino, Jason Vermin. Greg Gibson played on the record, but is no longer in the band.

‘Headless Over Heels’ – recorded at Pacific Recording Studios in Tacoma, Washington – features 11 original tracks plus a cover of the 4NonBlondes megahit – ‘What’s Up.’ Why is this album good? It has everything. Suburban Vermin stands in a small crowd as one of the few bands who still keep the original punk rock attitude alive. Production-wise, it’s very well done too. It does not generate those disturbing distortions, out of tune basses or anything of that sort. These guys (and a girl) really can play!

I am not a typical hardcore punk fan but I’ve really been enjoying this album. ‘Headless Over Heels’ is where riffs and rhythm are at their best, which the band also combine with, melody and aggressiveness, to bring a powerfully sophisticated, but still uniquely raw sound to the table.  Suburban Vermin is not to be confused with the pseudo pop punk, brought forward sometime back by the likes of Blink182, Simple Plan or Boxcar Racer etc. Instead, they take their cues from originals such as The Ramones, The Misfits and The Clash, which means pure adrenaline, no-filler-all-killer tunes!

This is the only Suburban Vermin music I have heard, so I don’t know how good their other stuff is, but this one is something everyone should experience. I know punk music isn’t for everyone, but everyone can enjoy punk music (if that makes sense). What I mean is, if you listen to the album and let it grow on you, you will appreciate what Suburban Vermin have achieved here.

The lyrics, among a few other things, covers a whole range of boy-girl issues, showcased by the high-energy, angst-driven, male-female vocals which you will come to love after a couple of tracks. However I think the guitar and bass are the best part of the package here. The sense of urgency, these instruments attach to the songs is exhilarating, as they smoke of wicked riffs and solos.

I would say the best songs are “Burnin’ Love”, “Metal Alice”, “Oh Gia”, “Last Laugh”, “Drunken Amazement” and “Walk Away”, but I’m sure I would have come up with a different list an hour ago. The punked-up, cover version of ‘What’s Up’, is an acquired taste, while every other song on the album is absolutely well-written, and perfectly executed and produced. Hearing ‘Headless Over Heels’, easily puts Suburban Vermin on my ‘all-time favorite punk band’ list.

More About ‘Headless Over Heels’ – The release of the album and the companion comic will be both physical and digital. The digital release will be available in an array of formats, thus allowing for easy viewing on e-readers and tablets. Each song on ‘Headless Over Heels’ has been interpreted by a different artist. These artists range from the band’s hometown all the way to the Philippines. The album release will also be celebrated with a professional music video shot in Southern California, directed by Eddie DaRoza. The video stars Scott Russo, the lead singer of the band Unwritten Law.

Learn how to put a song on itunes at ReverbNation.com