DRussellAmerica is an American rapper from Dallas, TX. His music has been featured in publications like WorldStar Hip Hop and has received a massive amount of plays on YouTube.  The artist is currently promoting his single and it’s supporting visual, entitled “Reminiscing”, taken from his latest project, “F*ck Tomorrow”. DRussellAmerica has shown he’s more than willing to experiment and toss new ingredients into his pot in order to cook up entirely different meals. He has shown an enthusiasm for going against the grain in an effort to stand out among his peers. Those same qualities exist on tracks like “Reminiscing”, where he effortlessly shifts between energies on a song that somehow manages to be both soothing and ravaging.

The track is loud, frenetic, and about as vibrant as rap can be. The song is busy, crowded with radiant instrumentation and stacked vocals, and rarely takes time to breathe. It’s a welcome addition to a genre that has become so occupied with spacey, bare-bones operations and overly simplistic results.

“Reminiscing” is structured much like any other major label rap release, and yet it deftly swerves away from the problems that plague the majority of its peers. It is overstuffed with ideas across its 4 minutes and 10 seconds, and not a single second of its runtime is wasted. 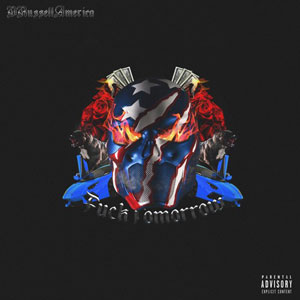 DRussellAmerica really reaches outside of his comfort zone here, and it really works. Hard-nosed vocals drop in and out as the beat slows down and speeds up as if the Dallas rapper is drifting in and out of a dream.

There’s something bewitching about this free-form feeling, as DRussellAmerica stylistic adventurousness being sounds as ambitious as the production. The artist is making music outside of the confines of rap while simultaneously pushing boundaries within it. He’s meaningful, and he’s fired up, with the song hitting on all levels.

What’s most notable immediately in “Reminiscing” is the beat. DRussellAmerica doesn’t rely on simple trap kicks and minimal, bassy synths to keep it going. There’s a myriad of sonic layers happening at the same time to produce a full-blooded backdrop.

here are passages in this song itself that is completely different from what most hip-hop artists are doing, and almost avant-garde in its execution. DRussellAmerica takes things to a dramatic place, with the orchestrated beat adding dynamic dimensions between the massive drop and buildup towards the end of the song.

While lots can be said about the attempts to be different in “Reminiscing”, which definitely deserve appreciation, his reverberating vocals are right up there with the beat, in the impressive stakes. DRussellAmerica separates himself from the norm in “Reminiscing”, executing something respectfully different from many of his contemporaries in the current hip-hop stratosphere.

Furthermore, it seems that he creates songs that he genuinely enjoys and this gives his tracks a sense of freedom. It’s important to see an artist these days not be afraid to do something different. That’s how change is made in a genre.