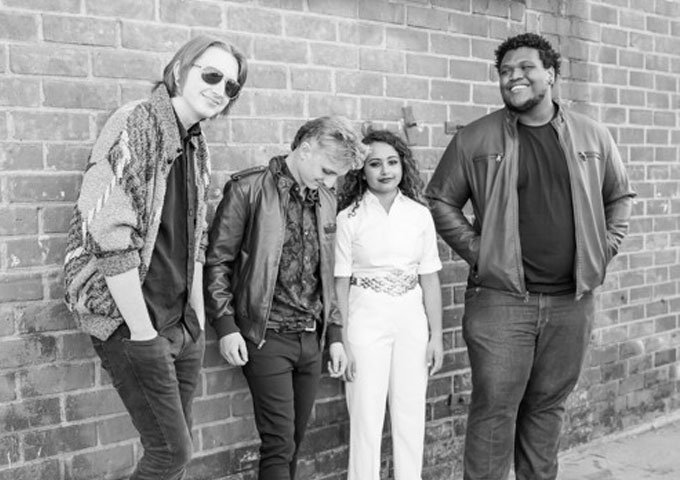 I am naturally resistant and extremely critical of most rock music released after nineties – okay I am a dinosaur of sorts. But honestly, I have not heard a lot of rock music since, that meets up to the artistry and craft of those released way back when. Love Ghost is one of those rare alternative rock bands that have burst through the radar to land into my very selective music collection. They are an easy listen. There is a warm feeling behind even their crunchiest rock songs, and now they’ve added an even stronger sense of melody and charm that is rarely seen in other alt-rock bands in the era of ring-tone-ready music production. The band who recently returned from a successful tour in Ireland, is made up of Finn Bell (guitar and vocals), Mya Greene (Viola and Keyboard), Ryan Stevens (Bass and background vocals) and Samson Young (drums). In the wake of their upcoming tour of Japan during March, the award-winning Los Angeles four-piece band release their latest single, “Mr. Blue”, which was produced by Carl Restivo (Tom Morello’s “The Atlas Underground”). The song – with lyrics written by Finn Bell – is about depression, and a youth’s inner struggle with relationships and finding his place in society.

This record in a lot of ways is very reflective, in its internal search of a person the world sees as a different version of himself. The track adds another perspective to internal conflict and self-growth.

It goes without saying that everyone has their own demons and struggles, but love Ghost did a great job creating music that everyone can relate to in one way or another. The track itself still carries the usual Love Ghost sound, the kind of alternative rock that can make someone think about summer drives down the highway in the warmth of the sun or cold nights staring up at the stars alone.

But they’ve taken that a few notches up. Overall, it’s evident that the band is evolving. Their sound appears to be growing. Going from a straight alt-rock debut, to something bigger, more inclusive, and they are succeeding. Love Ghost pay close attention to detail, filling up every sonic space. “Mr. Blue” is a floaty tune that lets the band fit right in with today’s alternative crowd, but keeps a close eye on the pop circuit. In the sense that the instrumental is powerful and reflective of the lyrics but not overpowering the meaning behind the song.

The formula seems both clever and ambitious enough – a journey into lyrically profound depths, attached to catchy guitar and vocal hooks. The strings and layers of perky guitar lines, as well as the meaningful lyrics ensure a crowd pleaser that will undoubtedly see increasing radio play within the coming year.

The rhythmic artillery and melodic vocals meld beautifully to create distinct music, and sublime content. Finn Bell’s vocal work is masterful, soothingly rich, and with a message to deliver.

Musically the band conveys their confidence in themselves, while “Mr. Blue” utilizes lyrics that speak on the years of adolescence and everything that comes along with growing up through that era of our lives. While Love Ghost compose and play, they never stray away from real emotion.