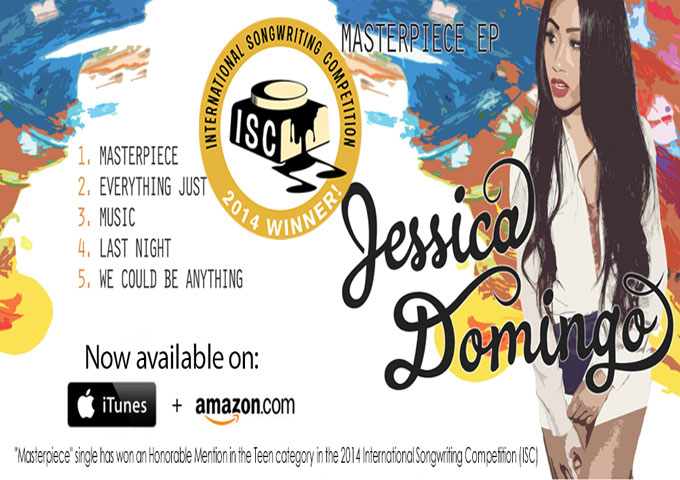 Jessica Domingo began piano lessons at the age of 5 and took up guitar at age 12. During this time, she also began performing in public. She later met Seattle-based producer Don Quijano, who was by her side at every performance. He taught Domingo guitar, provided industry guidance, and gave tips for working onstage and in the studio. The pair’s collaboration resulted in the “Take A Chance” EP, which was the followed up a full-length album, entitled “Just Vibe”, produced by Dylan Fant of Seattle’s One Shot Studio.

Aside from a very successful YouTube career and her new studio albums, Domingo has been involved with Asian American Singing Idol, the Seattle Filipino community’s ‘Pista Singing Idol,’ and the Filipino-Canadian PNT TV5 Singing Idol. In each of these contests, she was placed firmly in the top three competitors. Listening to her new release, “Masterpiece”, Jessica Domingo simultaneously evokes all great singers and yet, she’s totally original. Her voice is sultry, her lyrics are just colorful and profound, and unlike a lot of other singers, she’s not afraid to allow tons of contrasting emotion run through her vocals at any one time. Whether her voice is naked or drenched in harmony, she’s absolutely stunning.

Ethereal, beautiful music, with a blending of exotic melodies, world music-style compositions, pop and R&B all blend into Jessica Domingo’s evocative style. A nearly narrative singing style with a comfortable tone and timbre showcases Jessica’s late night lounge appeal just as much as it exults her pop chart and club appeal. The truth is she has a crossover sound that could truly flourish in many genres.

Like a mystical musical sprite from another universe, Jessica Domingo casts a spell with “Masterpiece” that is both a wonder and a treasured gift. It doesn’t fit in the box of any musical genre. It cleverly covers a wide range of musical styles which is a testament to Jessica’s artistry. She is unique, soulful, extremely talented, sincere-sounding and beautiful to boot!

Everything about Jessica is fantastic. Seek out videos of her singing on Youtube or listen to her blissful performance on “Everything Just Wasn’t Enough”. No two performances are alike, but all are innovative, expressive, and infinitely entertaining. This girl will eventually be a large-venue sell-out act.

‘Masterpiece’ has been recorded with multi-platinum Grammy award-winning producer Mikal Blue at Revolver Studios in Los Angeles. The single has already been released with an exceptional accompanying music video. This track will give you an amazing experience and is quite a treat for the ears…and the eyes!